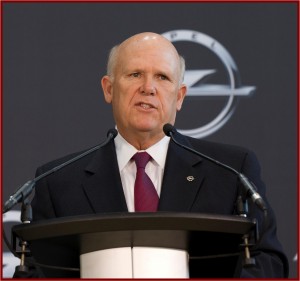 The convertible preferred stock was offered at $50 per share when General Motors emerged from bankruptcy.

General Motors (NYSE: GM) today announced that its Board of Directors has approved a quarterly dividend of $0.59375 per share on its Series B mandatory convertible junior preferred stock. The dividend of 4.75% annually is payable 3 June 2013 to Series B holders of record as of 15 May.

The dividend on the hybrid stock – which is a mixture of stock and debt – is cumulative. GM has not paid a dividend on its common stock since 2008 before it filed for bankruptcy. The total amount of the preferred dividend is $59.4 million.

The convertible preferred stock was offered at $50 per share when GM emerged from bankruptcy. The shares automatically convert to a variable amount of GM common stock on 1 December 2013. If GM common is trading at $33 for a period preceding that, preferred shareholders will at least break even on the $50 per share price paid. The leverage works both ways on the conversion price, though.

GM forecasts global auto industry growth in 2013, mostly by sales increases in the United States and China. Europe is expected to decline yet again.  Based on this outlook and new vehicle introductions, GM expects its global profitability to rise only modestly in 2013 on earnings before interest and tax (EBIT) adjusted basis, with improvements anticipated from each region.