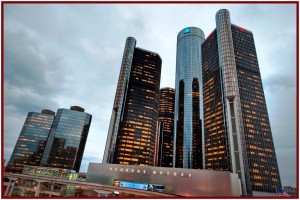 General Motors headquarters at the Renaissance Center in Detroit, Michigan following the close of trading on the GM's first day as a public company.

General Motors Company (NYSE: GM, TSX: GMM) today announced that its Board of Directors declared a quarterly dividend of $0.647 per share on its Series B mandatory convertible junior preferred stock.

The dividend is payable on 1 March 2011 to Series B holders of record as of 15 February 2011, and is cumulative. The total amount of the dividend is approximately $64.7 million, according to a GM release.

GM sold 100 million Series B junior convertible shares at $50 each as part of its initial public stock offering last November more than a year after emerging from bankruptcy in July of 2009 by using $50 million in taxpayer funds from the U.S. Treasury Department, and the Canadian Central and Ontario governments.

The UAW health care trust fund also accepted shares in the reorganized GM in lieu of money owed it.

The convertible shares become common stock on 1 December 2013 unless they’re converted before then. They carry have a 4.75% dividend. Common is currently trading at close to $38 a share.

Based on gradually increasing global sales and markedly lower costs, GM posted a $4.2 billion profit in the first nine months of  2009, a positive trend that analysts expect to continue with 2010 results are revealed.