General Motors Invests in a Small Maker of Electric Buses 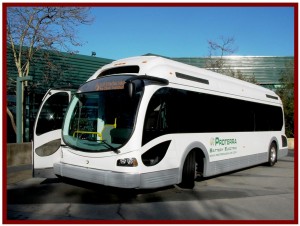 The investment allows Proterra to complete federal validation testing of its bus.

An arm of GM – General Motors Ventures – will invest $6 million in Proterra Inc., a maker of electric buses, through an investment group, led by venture capital firm Kleiner Perkins Caufield & Byers. In total $30 million will go to the bus maker.

Fledgling Proterra makes prototype battery electric buses that are averaging up to 24 mpg (diesel equivalent) in service, in what’s claimed to be a more than 600% improvement over a typical diesel engine bus. Using technology developed by Proterra, the lightweight, composite-body bus recharges in about 10 minutes.

Three of what are called EcoRide BE-35 buses are currently in a test fleet near Pomona, Calif., with additional buses to be added. New buses and charging stations are also headed to San Antonio and Tallahassee, Florida (sic), later this year. This investment allows Proterra to complete federal validation testing of its bus, roll out additional pilot fleets and complete initiatives to reduce costs and increase volume production at its Greenville, S.C. manufacturing plant, which will have the capacity to produce 400 buses annually.

“While this investment will help Proterra commercialize its electric bus and fast-charging technology, it also helps to address the future challenges of urban mobility,” said Jon Lauckner, president of GM Ventures

In a release GM said that with up to a 40-mile range for the under 10-minute fast charge application, the EcoRide BE-35 can replace 80% of diesel buses in typical transit and shuttle use without altering schedules or passenger service. The EcoRide can also be configured for longer ranges while charging at a central location.

“With the support of GM’s automotive expertise and technology leadership, we can achieve a better, cleaner future for public transportation,” said Jeff Granato, president of Proterra. “We are proud to have General Motors on board.”