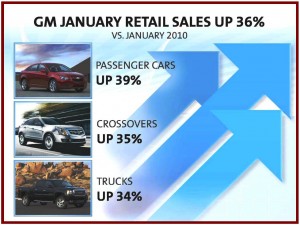 “January was a good start to the new year for us.”

General Motors dealers reported 178,896 total sales in the United States during January, a 23% increase from a year ago for the company’s four brands. Retail sales were 36% higher than January 2009. Counting the now discontinued brands, GM sales were up 21.8%.

For the month, overall GM fleet sales were down 7%, with sales to rental fleets declining 11%, as GM backs out of the low margin business. Sales to commercial customers rose 7%.

“January was a good start to the new year for us,” said Don Johnson, vice president, U.S. Sales Operations, “and a good start for the U.S. economy.”

There is a significant strategic shift at GM as it backs out of the low margin fleet business and emphasizes retail sales, enabled by new products. GM also appears to have caught competitors by surprise with a targeted incentive strategy, but it will take more than a month to confirm.

GM has now changed its policy of providing monthly incentive levels, which were down more than a $1,000 per vehicle last year. GM will provide directional guidance and comments only. “We are not going to tell our competitors what we are doing,” said Johnson.

In January total sales for GM’s crossovers improved 31% versus January 2010, led by the Chevrolet Equinox (up 35%), GMC Terrain (up 48%) and Cadillac SRX (up 31%). Retail sales for the Buick Enclave, Chevrolet Traverse and GMC Acadia continued to improve in January, up 37%, 15% and 24% respectively.

Chevrolet delivered 125,389 total vehicles in January, a 19% increase versus last year. Retail sales for Chevrolet rose 33% for the month, which based on early results might make it the largest retail brand in the U.S. Retail sales were propelled by improving Cruze sales, which were 129% higher than the compact car it replaces. Silverado and Equinox retail sales were up 35% and 46% respectively.

Buick reported 13,269 total sales, a 32% increase compared to a year ago. This includes a 44% rise in year-over-year retail sales, led by Regal (2,290 units) and Enclave, which had retail sales 37% higher than last year. This marks the 16th consecutive month of year-over-year sales gains for the brand.

GMC reported total sales of 27,658, a 30% increase compared to the same month last year. This marks the 16th consecutive month of year-over-year sales increases. Retail sales were 36% higher than last year, spurred by Yukon, Sierra, Acadia and Terrain – up 32%, 49%, 24% and 34%, respectively.

Cadillac reported total sales of 12,580 for January – 49% higher than last January, with retail sales increasing 55%. January was the 12th consecutive month of year-over-year total and retail sales gains. SRX retail sales were up 43% compared to a year ago. CTS retail sales rose 114%, driven by strong demand for the all-new CTS Coupe and Sedan. The Escalade family saw retail sale rise 18% versus a year ago.