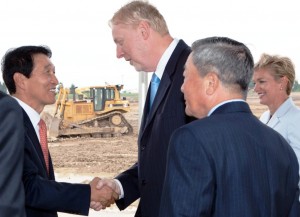 General Motors and the U.S. Department of Energy’s Argonne National Laboratory said today they have reached a worldwide licensing agreement to use a battery technology that lasts longer and can accept higher charging voltages.

The U.S. Government also announced that it is also allowing the taxpayer-financed advanced technology to be used by the Korean firm, LG Chem, in what is a controversial move that potentially will start a chain reaction of criticism. LG Chem already uses the technology in the battery used in the Chevrolet Volt.

The timing of the announcements appears to be a political move to forestall or ameliorate criticism that U.S. trade and diplomatic policies favor offshore firms at the expense of American ones.

With national unemployment at 10% officially, actually much higher, and the national debt and at record levels, this is not a trivial issue.

Battery limitations – cost, performance and durability – are the main obstacles to making electric vehicles practical for the global auto market, currently 65 million vehicles. Critics will ask why the U.S. wants to help other countries compete against us?

GM will use composite cathode material to make advanced lithium-ion batteries that it claims will last longer between charges and can charge at higher voltages than current batteries.

At the moment GM has no choice but to use LG Chem technology in the Chevrolet Volt since U.S. trade policies have allowed Asian firms to wipe out the U.S. electronics industry.

Worse, there are subsidies from U.S. and Michigan taxpayers to help LG Chem operate in the U.S. at a $300 million LG Chem battery plant in Holland, Mich., for Volt batteries. This is a stark indication of how far the U.S. is behind in 21st century technologies, and why the U.S. now has to kow-tow to foreign countries and their firms.

“The creation of this battery technology represents an important return on the American investment in innovative vehicle and battery research,” said Energy Secretary Steven Chu, in a GM supplied statement. “This agreement gives General Motors the ability to use cutting-edge battery technology throughout its supply chain. The licensing of this technology will also spur the renewal of the American battery industry, creating hundreds of new jobs where they are needed most.”

The cathode material licensed to GM is part of Li-ion battery inventions and patents developed at Argonne with U.S. taxpayer funding.  The agency through taxpayers also provided funding for early science research that helped develop this technology.

The Argonne-developed technology offers the longest-lasting energy available in the smallest, lightest package: a 50-100% increase in energy storage capacity over conventional cathode material. Further, its unique lithium- and manganese-rich mixed-metal oxide combination extends the operating time between charges, increases the calendar life and improves the inherent safety of lithium-ion cells. And to GM’s credit under direction from vice-chairman Tom Stephens, the company is vigorously pursuing battery technologies that it can patent and control.

GM claims the use of the cathode material will yield advanced batteries that are high-performing, long-lasting and safe when compared to the existing technology that has dominated the market for nearly two decades.

Compared with currently available materials, Argonne’s composite cathode material has a unique combination of lithium- and manganese-rich mixed-metal oxides that will: