Posted on 9 January 2019 by Kenneth Zino 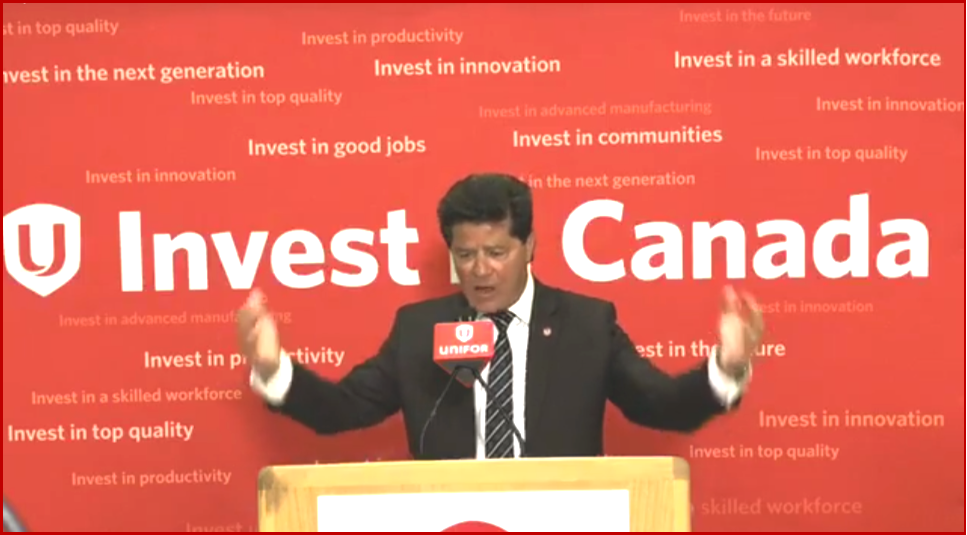 Diaz said “as GM’s most flexible plant, the Oshawa line is its only plant capable of building pickups, SUVs and cars.”

In a callous move, General Motors yesterday rejected all the proposals from the Canadian union Unifor that were presented at a meeting just before Christmas. These proposals would keep the highly productive and high quality Oshawa plant open.

“Unfortunately, all Unifor’s proposals would involve substantial incremental costs and a further deterioration of GM’s competitive position,” claimed Gerald Johnson Vice President, Manufacturing and Labor Relations General Motors Company. “Having completed an analysis of Unifor’s proposals, GM has determined that it cannot pursue them because they would not combat the declining economic and market factors that must be addressed.” (AutoInformed: The GM Grinch that Stole Christmas, or Did It?)

One of the things not addressed by GM is an informal boycott that is apparently underway in Canada against GM products. Unifor is Canada’s largest union in the private sector, representing 315,000 workers in every major area of the economy. While not formally endorsing the boycott yesterday, Jerry Diaz, Unifor national president, said that hurting GM sales and political action from the Canadian government are ways to help save the Canadian auto industry that is being decimated by newly constructed plants in Mexico.

GM has built several Mexican plants that are assembling what Oshawa used to build exclusively. Diaz said “as GM’s most flexible plant, the Oshawa line is its only plant capable of building pickups, SUVs and cars.”

In its proposal to General Motors the union pointed out that the automaker currently imports more than 150,000 vehicles from overseas and with “the pending implementation of the new CUSMA trade agreement it makes sense to return that production to Oshawa and other Canadian GM facilities.” (Variables Abound – Meet the New NAFTA and NAFTA Lite – US-Mexico-Canada Agreement Hurts US Workers)

Unifor also noted that GM wants a future focused on electric vehicles (EV) so Unifor wants the proposed allocation of a future EV platform to Oshawa, one of the company’s highest quality and most productive plants.

“These are not hard times for General Motors,” said Dias. “With 3.2 million vehicles being built in North America this year there is plenty of room for Canadian production.” The union also expressed disappointment in the silence and lack of action by both the federal and provincial governments.

Unifor will continue the #SaveOshawaGM campaign with a major rally in Windsor, across from GM headquarters, on Friday January 11 with hundreds of workers from across the province. On that Friday, GM will outline its future direction at an investor’s conference. The Unifor timing is not coincidental. A new independent study says closure of the Oshawa Assembly Plant would create an economic shock, resulting in 24,000 lost jobs and a loss of $1 billion per year in government revenue.

“We’re looking at tens of thousands of jobs and a direct hit to the GDP,” said Dias. “Should GM proceed with plans to close Oshawa, the economic impact would be substantial, both in the short and long term.”

Unifor commissioned the study, conducted by Robin Somerville, Director of the Center for Spatial Economics and President of Quantitative Economic Decisions Inc., to examine the economic impact of a potential closure of GM’s Oshawa operations at the end of 2019. The study shows there would be an immediate fallout in 2020, with Ontario’s GDP expected to fall by $5 billion and a decline in Ontario government revenues of $330 million. In the long-term, Ontario’s economy would shrink by an average of $4 billion each year to 2030, leading to a reduction in Ontario government revenues of nearly a half billion and federal government revenues of just over half a billion a year.

The study also projects job losses will mount over time to reach 14,000 in Ontario and a further 10,000 elsewhere across Canada by 2025. To read the full report and for further background visit  SaveOshawaGM.ca.

The report comes days before GM’s January 11, 2019 investor event where the company is expected to outline its future corporate direction, which includes expansion of production in Mexico. Timed to coincide with the investor event, hundreds of Ontario workers will rally in Windsor, Ontario directly across from GM’s Detroit headquarters to call on the automaker to continue operating its Oshawa Assembly Plant and maintain production in Canada. Information on the rally is available here.