General Motors (NYSE: GM) said this morning that it will accelerate its business plan, building on the strategy it laid out in 2015 that has resulted in lack-luster returns for shareholders. GM is acknowledging what most automakers hold private: the marketplace is moving faster than automakers. (see Ford Motor Q3 Net, EPS, EBIT – All Down as Ford Stumbles) 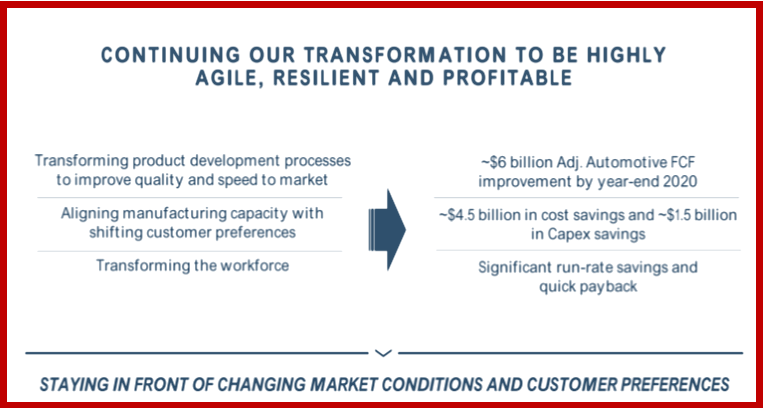 As a result, in a preemptive action GM is slashing costs, it hopes by up to $4.5 billion by the end of 2020, closing five assembly plants, merging product development organizations, cutting about 17,000 jobs and eliminating family cars – all to get to a 10% earnings margin before interest and taxes (EBIT). Part of the fallout includes dropping the Chevrolet Cruise sedan and hatchback and ultimately the Impala.  GM hopes customers will substitute other products for what looks to be ~350,000 in dead volume or potential lost sales by AutoInformed’s quick calculation. Trump’s tariff and trade war is a culprit. GM cut for the year months ago because tariffs were driving up production costs, raising prices even on domestic steel. Rising interest rates are also killing jobs.

In investor relations babble the latest reorganization is designed “to strengthen its core business, capitalize on the future of personal mobility and drive significant cost efficiencies.” Sounds like reorganization 101 to us. One that all automotive C-suite suits PowerPoint out to the markets and stockholders with depressing regularity. 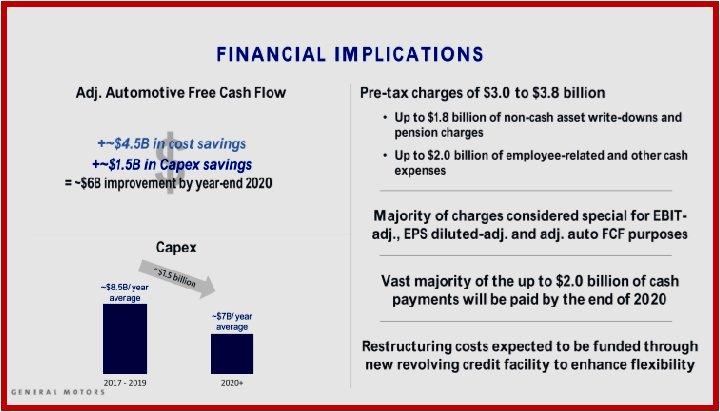 These moves – likely to be applauded by Wall Street because many people will lose jobs –  are expected to increase annual adjusted automotive free cash flow by $6 billion by year-end 2020 on a run-rate basis. GM stock this afternoon was trading at $38, about what it traded at when it emerged from what was supposed to be a debt purging bankruptcy that, allegedly, would allow it to thrive.

“The actions we are taking today continue our transformation to be highly agile, resilient and profitable, while giving us the flexibility to invest in the future,” claimed GM Chairman and CEO Mary Barra. “We recognize the need to stay in front of changing market conditions and customer preferences to position our company for long-term success.”

Contributing to the cash savings of approximately $6 billion are cost reductions of $4.5 billion and a lower capital expenditure annual run rate of almost $1.5 billion. The actions include:

Transforming product development – GM is evolving its global product development workforce and processes to “drive world-class levels of engineering in advanced technologies, to improve quality and speed to market.” Resources allocated to electric and autonomous vehicle programs will double in the next two years.

Additional actions include:
Increasing component sharing across products, especially those not visible and perceptible to customers.

Expanding use of virtual tools to lower development time and costs.

Optimizing product portfolio – GM has invested in newer, higher efficient vehicle architectures, especially in trucks, crossovers and SUVs (a highly risky strategy because most are not saleable outside of North America)).

GM now intends – however tardy – to prioritize future vehicle investments in its next-generation battery-electric architectures. As the current vehicle portfolio is optimized, it is expected that more than 75% of GM’s global sales volume will come from five vehicle architectures by early next decade.

Increasing capacity utilization – In the past four years, GM has shifted capital and resources to support the growth of its crossovers, SUVs and trucks, adding shifts and investing $6.6 billion in U.S. plants that have maintained 17,600 jobs. With changing customer preferences in the U.S. and in response to market-related volume declines in cars, future products will be allocated to fewer plants next year.

Assembly plants that will be unallocated (translation without anything to build, therefore dead – editor) in 2019 include:

Propulsion plants that will be unallocated in 2019 include:

In addition to the previously announced closing of the assembly plant in Gunsan, Korea, GM will cease the operations of two additional plants outside North America by the end of 2019.

These manufacturing actions are hoped to increase capacity utilization to above 70% by 2020 with more details due on 11 January 2019 at a GM investor conference in New York City.

GM also said it will continue working to improve other manufacturing costs, productivity and the competitiveness of wages and benefits, in a passing nod to upcoming UAW talks in 2019.

Staffing Cuts – GM claims it is “transforming its global workforce to ensure it has the right skill sets for today and the future, while driving efficiencies through the utilization of best-in-class tools. “Actions are being taken to reduce salaried and salaried contract staff by 15%, which includes 25% fewer executives to streamline decision making.

GM expects to fund the restructuring costs with credit. GM expects to record pre-tax charges of $3.0 billion to $3.8 billion related to these actions, including up to $1.8 billion of non-cash accelerated asset write-downs and pension charges, and up to $2.0 billion of employee-related and other cash-based expenses.

GM says that the majority of these will be special charges for EBIT-adjusted, EPS diluted-adjusted and adjusted automotive free cash flow purposes. Most of these charges will be incurred in the fourth quarter of 2018 and first quarter of 2019, with some additional costs incurred through the remainder of 2019.