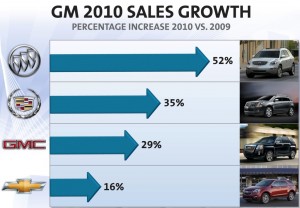 Progress continues at GM as it defends its Number One spots in U.S. and China.

General Motors vehicle sales in China rose 28.8% to a record 2,351,610 units in 2010. GM’s manufacturing joint ventures and major brands all set new annual sales marks, allowing GM to remain the leader among global automakers in the world’s largest auto market for the sixth consecutive year. China is now clearly GM’s largest market, where it has been the Number One automaker since 2005, when it surpassed Volkswagen.

GM U.S. retail sales rose 16% for the year. For the first time in memory GM gained total and retail market share for the year, based on preliminary numbers.

Since 2005, the crossovers’ proportion of the U.S. market has almost doubled to about 22% of the industry. In the same period, crossovers as a proportion of GM sales have increased more than threefold and now represent 26% of the company’s sales volume.

In 2010, combined sales of the Chevrolet Avalanche, Chevrolet Silverado and GMC Sierra full-size pickups increased to 520,444 units – up 17% compared to 2009.

GM predicts that the total U.S. vehicle marketing 2011 will be in the 13-13.5 million range, including medium and heavy duty trucks up from a projected 11.8 million in 2010. Don Johnson, vice president of U.S. Sales Operations provided the estimate on a sales call for analyst and media this morning.