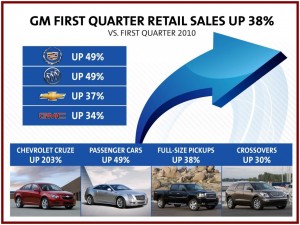 Transaction price for Cruze was $2,000 higher than Honda Civic, +$3,000 for Toyota Corolla. New Civics and Ford Focus arrive this year, though.

Dealers for General Motors Company reported 206,621 total sales during March in the U.S., an overall increase of 11% and a 17% increase in GM retail sales. Discounted fleet sales were 27% of the total.

For the first three months, total GM sales increased 26% to 592,545 units compared to a year earlier. As a result – based on preliminary sales data – each of GM’s remaining brands – Chevrolet, Buick, GMC and Cadillac – gained retail and total market share during the quarter, a welcome reversal of a declining trend that was underway for five decades and ultimately led to GM’s bankruptcy in 2009.

One huge hit was the Chevrolet Cruze compact sedan, which doubled its share of the fastest growing segment in the U.S. to 11.4% compared to what the ancient Cobalt was doing one year ago. The Cruze is on track to be GM’s best selling vehicle by year end.

The Cruze was unfortunately delayed as GM was being reorganized, but is the best GM small car in the U.S. in history and provides strong competition in a segment long dominated by Toyota, Honda and Nissan, all of whom now face production disruptions as a result of the earthquake in Japan.

A large question remains about what will happen to incentives and vehicle pricing in the face of Japanese vehicle shortages and price increases.

“We are not in a position to speculate on pricing,” said Don Johnson, vice president, U.S. Sales Operations. “We are going to make sure we are in the market and stay competitive.” Johnson added that he foresaw no GM production disruptions in the foreseeable future. Potentially, the natural disaster in Japan gives GM, Ford Motor and Chrysler a chance to win back lost share