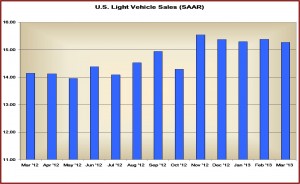 Overall, Chevrolet was flat for the month  at 173,859 in a market that grew at 3.4% when all the sales numbers were in. This is not good news for GM, which needs Chevrolet to put some more runs on the board.

General Motors sold 245,950 vehicles in the United States in March, up 6% compared with a year ago. Retail sales increased 4%, fleet sales were up 12%, with the fleet mix at 27% of total sales. As a result, GM retained its position as the sales leader in the U.S. ahead of Ford Motor and Toyota Motor, respectively.Sales of GM crossovers were up 31%; trucks, which include pickups, vans and SUVs, were up 2%; and car sales were down 3% as high volume large pickup sales were up 6%.

Once again, the aging Silverado pickup truck was the best seller at GM with more than 39,000 sold. When combined with GM’s sixth best seller, GMC Sierra at almost 14,000, in total pickup sales were 53,378. Impressive as that is for an aging design from 2007, it is not even close to topping Ford’s F-Series, which tallied 67,513 for the month. The real battle here begins shortly as newly redesigned GM pickups finally come to market later this spring.  (Read AutoInformed on 2014 Chevrolet Silverado and GMC Sierra Pickups Top F-Series and Ram in Fuel Economy with EPA 23 MPG Highway for V8)

Kurt McNeil, vice president of U.S. Sales, said to media on a conference call that, “We continue to see slow and steady growth, so we have the ability to ebb and flow production on an as needed basis, doing it in an efficient manner. As far as the truck sales are concerned, we do continue to see that fueled primarily by growth in housing, with small business sales are up 32%.”

Overall, Chevrolet was flat for the month year-over-year at173,859 cars and trucks, in a market that grew at 3.4% when all the sales numbers were in. This is not good news for GM, which needs Chevrolet to put some more runs on the board, than competitors as the Chevy sponsored Detroit Tigers did yesterday in a chilly Minnesota as the baseball season opened.

Cadillac sales were up almost 50% with the new ATS compact selling 3,587 or more than half of all of all of Lincoln’s total sales.

Buick sales at 18,000 were up 37% lead by the Enclave and the smaller Encore crossovers and the Verano compact sedan.