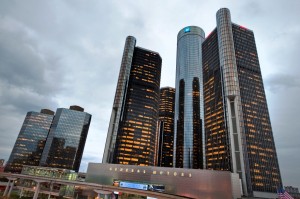 The General Motors headquarters at the Renaissance Center in Detroit, Michigan following the close of trading on the new GM’s first day as a public company.

General Motors Company announced today that underwriters have exercised all of their “over-allotment” options to purchase an additional 71.7 million shares of common stock from the selling stockholders – that would be Canadian and U.S. taxpayers –  for a total of an additional $2.37 billion from the Initial Public Offering or IPO of last week.

Also the Wall Street firms underwriting the stock sale took an additional 13 million shares of “mandatory convertible junior preferred stock from the taxpayer owned company, for a total of $650 million.

The closing for the additional shares from Morgan Stanley & Co. and J.P. Morgan Securities is expected to take place on December 2, 2010. Its ultimate effect on GM’s stock price remains to be seen, but savvy investors probably already discounted the dilution effect since it was clearly laid out in the prospectus.

What this really means is U.S. taxpayers now own about 26% of GM (33% if all options are exercised), down from Treasury’s ownership of GM’s outstanding shares of common stock of almost 61% before the IPO.

U.S. Taxpayers made about $13.6 billion from the IPO before any fees from the offering ae deducted. (See GM Stock Price Soars on IPO Frenzy)

The convertible shares become shares of common stock on 1 December 2013 unless they’re converted before that date. They pay a 4.75% dividend.

While this is relatively good news, taxpayers are still losing money on their investment in GM. The U.S. federal government has to sell its remaining ownership of GM at about $53 a share for taxpayers to be break even, if my quick calculations are right.

Another quirk or indirect – but potentially expensive – taxpayer subsidy still to be reckoned with is a tax credit for previous losses – $16 billion – that was transferred from the bankrupt GM Corporation to the reorganized GM Company. Normally the losses would have died with the old company.

So the more successful GM is at making money up to the total of the losses, the more taxpayers subsidize what some people derisively call Government Motors.