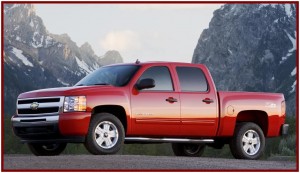 Silverado is the best seller at GM by far.

General Motors is issuing an unusual “preliminary recall” on 1.9 million 2007-2011 model full-size trucks and SUVs with passenger-side front airbag inflators from Takata.  These were listed in defect information reports, aka (DIRs) submitted to NHTSA on 16 May 2016. NHTSA earlier in the month had expanded the recall by 40 million.

The recall numbers and the expenses are astronomical for GM – and Takata as well as other automakers in this ongoing disaster. This is already the largest safety defect recall in U.S. history. Takata inflators have been tied to ten deaths and more than 100 injuries so far in the United States.

The GM move follows the announcement yesterday that Ford Motor is recalling another 1,896,443 vehicles with potentially deadly Takata airbag inflators that send shrapnel into the interior as they blow up.

However, GM said today it “does not believe that a safety defect exists at this time.” In a required NHTSA filing. GM said it “expects to provide NHTSA with additional test data, analysis or other relevant and appropriate evidence in support of its belief that these GM vehicles do not pose an unreasonable risk to safety.”

This lack of a safety defect assertion, according to GM, is based on “no inflator ruptures during an estimated 44,000 crash deployments as well as analysis of parts returned from the field, and can be explained by the unique Takata inflator made for GM’s vehicles and features unique to GM trucks and SUVs.”

GM said that the Takata passenger-side airbag inflators used in the trucks and SUVs are a variant engineered specifically for GM vehicles. Changes include features greater venting, unique propellant wafer configurations and machined steel end caps. “The inflators are packaged in the instrument panel in such a way as to minimize exposure to moisture from the climate control system. Importantly, these full-size trucks and SUVs have features and attributes that minimize the maximum temperature to which the inflator will be exposed, such as large interior volumes and standard solar-absorbing windshields and side glass.”

Ken Zino is an auto industry veteran with global experience in print, broadcast and electronic media. He has auto testing, marketing, public relations and communications expertise garnered while working in Asia, Europe and the U.S.
View all posts by Ken Zino →
This entry was posted in auto news and tagged autoinformed, autoinformed.com, Ken Zino, nhtsa. Bookmark the permalink.