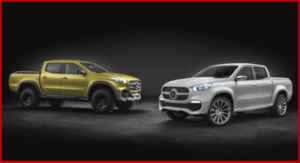 Mercedes-Benz later this year will launch a mid-size X-class pickup truck with the latest concepts appearing at the Geneva Motor Show next week. First unveiled in Sweden last year, Concept X-Class is in the mold – practically a clone – of American pickups – tough, functional, and with off-road capability. X-class has a ladder-type frame, high-torque six-cylinder engine, and permanent all-wheel drive. The most expensive model – yet un-priced – will be powered by a V6 diesel with 4MATIC permanent all-wheel drive.

The all-wheel-drive system will combine with an electronic traction system, a transfer case with reduction gear, and two differential locks. The traction system and the electrically operated on-demand differential locks will route power to where grip is best. Under extreme off-road conditions, the rear differential and the inter-axle differential can be locked. A payload of more than 1.1 tons and a towing capacity of up to 3.5 tons are possible. 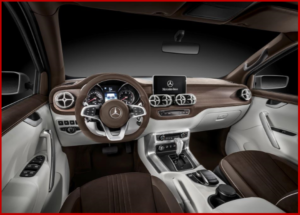 Nary a word about the U.S. with its threatening Trump border tax, although the size and profitability of the market here makes importation inevitable in our view.

Production for the European, Australian and South African markets will start at the Nissan plant in Barcelona, Spain, in 2017. Production for the Latin American market will commence at a later stage at the Renault plant in Cordoba, Argentina. Nissan is the second-largest manufacturer of mid-size pickups with a payload of one ton in the world, I has 80 years’ experience in the segment.

“With the Mercedes-Benz pickup, we will close one of the last gaps in our portfolio,” said Dieter Zetsche, Chairman of the Board of Daimler AG. Zetsche, of course, ran Daimler-Chrysler for years with its Jeep and Ram pickup truck lines.

Daimler correctly notes that the global market for mid-size pickups is undergoing a radical change. Once, they were bought as mere “workhorses.”  No more, they are becoming increasingly popular as versatile vehicles for a simultaneous private and commercial use, and as vehicles for private use. The percentage of privately used pickups has been growing steadily for years. The double cab is now the dominant body style because it offers room for up to five people. More and more private and commercial customers ask for vehicles with the characteristics and comfort features of a passenger car.

Irony here: the original post-WW2 Ford F-100 – it would be considered a mid-size today – was a smash hit because it used a passenger car interior, spawning the dominate F-Series of today – the best-selling vehicle in the U.S. for 40 years. Ford abandoned the mid-size pickup market years ago, in a truly bone-headed corporate decision. Ford Motor once dominated the compact pickup truck market in the U.S. until years of product neglect combined with an assault by Toyota and Nissan pushed it to a footnote in the segment. Ranger was on the list of Top Ten sellers in the U.S. and produced in two plants here. Now, Ford is bringing back the Ranger midsize pickup truck to its North American vehicle lineup in 2019 and a Bronco midsize SUV to its global vehicle portfolio in 2020. Both vehicles will be manufactured at Ford’s Michigan Assembly Plant in Wayne, Michigan. (Ford to Bring Back Ranger Pickup to North America)

Mid-size pickups now have the largest share of the total vehicle market in Australia with 14.1%. Argentina comes close behind with 11.6%. This means that in these countries, one out of every eight registered vehicles is a pickup in the one-ton category. In Brazil, mid-size pickups have a share of almost 5% of the total vehicle market. That figure is a laughable 0.5% in Germany, 1.3% in Great Britain, 1.4% in Turkey, and 0.8% in Donald Trump’s Russia.

The X-Class concept pickup is painted in “lemonax metallic” and is claimed to focus on the classic traits of a pickup – toughness, functionality, strength, and off-road capability – with its electric winch, large, size 35 x 11.50 tires, and an under-ride guard. The second X-class concept is painted in white metallic.

Drivers will be able to connect with their pickup by smartphone, tablet or PC at any time and from anywhere. For example, to send navigation destinations to the vehicle or query where the pickup is parked and how much fuel is in the tank. In addition to these optional remote online services, standard services such as accident recovery, maintenance management, and breakdown management will also be available. A free-standing, high-resolution central display, as well as the central controller and multi-functional touch-pad are like a smartphone. All telematics functions can be controlled with the touch-pad by using gestures or by entering characters and digits. Modern driver assistance systems based on cameras, radar, and ultrasound sensors “will support and relieve the driver in many situations.”

Ken Zino is an auto industry veteran with global experience in print, broadcast and electronic media. He has auto testing, marketing, public relations and communications expertise garnered while working in Asia, Europe and the U.S.
View all posts by Ken Zino →
This entry was posted in milestones, new vehicle and tagged autoinformed, autoinformed.com, Ken Zino, Mercedes-Benz X-Class Pickup Truck. Bookmark the permalink.