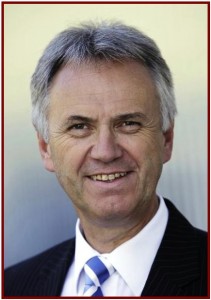 Spicing up Bentley by adding a little pepper to the entries on the menu?

Bentley Motors announced today the appointment of Rolf Frech, 53, as its new Board Member for Engineering. Frech joins Bentley from Porsche AG where he was Director for Complete Vehicle Engineering and Quality. Bentley  is currently working on a four-door sport utility vehicle based on the Porsche Cayenne. Both companies are owned by Volkswagen, Germany’s largest automaker.

Frech succeeds Dr Ulrich Eichhorn, who becomes the Managing Director with the Verband der Automobilindustrie (VDA), the German association of the auto industry.

VDA has seen some executive changes as German automakers continue to be outflanked by the growing green movement in Germany and across Europe, one that now sees the proposed banning of conventional automobiles from most cities and the shifting of transportation spending to water and rail. (See IAA Frankfurt Motor Show Emphasizes Concepts and Electric Vehicles as Euro Zone Economic Crisis Threatens Automakers, EU Proposes Banning Cars from Cities. Automakers Protest)

Frech joined Porsche in 1983 and worked as an engine development engineer before taking responsibility for simulation and testing. Since becoming Porsche’s Director for Complete Vehicle Engineering in 2001, he has “been instrumental in the expansion of the Porsche model range including both the Cayenne and Panamera in addition to the sports cars” of Porsche, Bentley said in a statement.

“Having worked with Frech for 12 years I know he will be a real asset to the company and provide technical leadership to our Design, Engineering and R&D operations,” said Bentley Chairman and Chief Executive, Wolfgang Dürheimer.

Bentley’s global sales through August 2011 increased by 31% compared with the same period last year as 4016 cars were delivered to customers. The increase in sales has been caused by demand for Bentley’s newly launched Continental GT – which is now available in all markets and accounts for just under half of all sales. The popularity of the brand in the Chinese region continues to increase, with sales up 67% and passing 1,000 units for the first time ever.

However, every major market saw growth with the Americas up 36% and Europe up 35%, led by resurgent sales in Germany which have increased by two thirds. With the imminent arrival of the new Continental GTC, Bentley expects to increase its overall sales by around 40% in 2011.

Mr. Frech, who is married with two daughters, will take up his new role at Bentley in November 2011.

Dr Ulrich Eichhorn joined Bentley in 2003 as Board Member for Engineering after being Volkswagen Group Director of Research. Prior to that, Eichhorn worked as a development engineer at Ford of Europe. Along with Richard Parry-Jones, he was known there for his ability to produce vehicles with excellent dynamic characteristics and precise handling. Eichhorn worked on the final development of the Continental GT and his tenure included the Continentals GTC, Flying Spur and Supersports, the Azure and Brooklands, the all-new Mulsanne and, most recently, the second generation Continental GT and GTC.