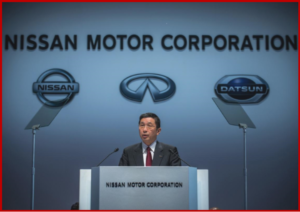 Nissan Motor Co., Ltd.’s board of directors decided today to “accelerate” the company’s transition to a three statutory-committee format. The format is one of the recommendations of the Special Committee for Improving Governance delivered on March 27. (Was 2008 the Year When Carlos Ghosn Went Rogue? Ghosn’s Former Speechwriter on What He Did for Nissan – And What That Did to Him)

The report on first read seems to confirm Ghosn’s defense that he was set-up because he wanted the unify the Alliance between Renault and Nissan and later Mitsubishi in the face of Japanese pride in having survived because of a gaijin attempting to make the Alliance stronger. However, that may or may not play out in the Japanese courts in the coming months. (for recent related changes see Ghosn Fallout – Nissan Changes American Senior Management)

Nissan claims that building the best possible corporate governance structure is an urgent task with a large nudge from Japanese authorities (who questioned its management at the upper board levels – Nissan Mired in Japanese Corporate Governance Scandals) and is working on swift implementation of a new organization. The company is now preparing an internal system to enable transition by the end of June, in expectation of receiving shareholder approval at the scheduled Annual General Meeting of Shareholders.

To this end, the board today approved the Provisional Nomination and Compensation Advisory Council to provide advice to the board of directors. The council will select director candidates for proposal to shareholders in June and advise the board regarding director compensation.

The future of the so-called alliance of Nissan, Renault and Mitsubishi is in question since November when Ghosn, then chairman of all three companies, was arrested in Japan.

Japanese prosecutors have accused him of hiding his compensation and shifting personal investment losses to Nissan’s books. Ghosn denying the charges, claims Nissan executives who opposed closer ties to Renault went to Japanese authorities with false charges. Adding to the intrigue, Ghosn remains on the Board of Directors at all three companies.