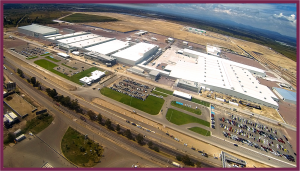 Ross Perot, wrong on many things, was dead right about NAFTA and its effect on US jobs.

The giant sucking sound continues this morning as the Renault-Nissan Alliance and Daimler announced a €1 billion mega-plant in Mexico to build luxury cars. About 5700 good jobs will be created – engineering, line workers and support staff. Jobs largely based on the US luxury car market.

The new plant will be built close to an already existing Nissan plant, and will have an annual capacity of 300,000 vehicles when completely operational. Many of the common platform luxury models – 2017 Infiniti, 2018 Mercedes-Benz – will of course be headed into the U.S. under the job destroying NAFTA deal that allows easy importing and exporting.

Renault-Nissan CEO Carlos Ghosn and Daimler CEO Dieter Zetsche said today that their companies would establish a 50:50 joint venture, the business entity that will oversee construction and operation of a new plant in Aguascalientes in north-central Mexico.

Ken Zino is an auto industry veteran with global experience in print, broadcast and electronic media. He has auto testing, marketing, public relations and communications expertise garnered while working in Asia, Europe and the U.S.
View all posts by Ken Zino →
This entry was posted in economy, manufacturing, new vehicle and tagged autoinformed, autoinformed.com, daimler, Ken Zino, mercedes-benz, renault-nissan. Bookmark the permalink.