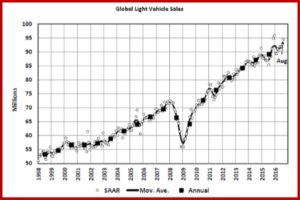 The global light vehicle market moved upwards in August after being flat recently, according to consultancy LMC Automotive with a seasonally adjusted annualized rate (SAAR) of light vehicle sales rose to 94.5 million units a year.

Trends were mixed. An up-welling in China sales, the world’s largest auto market, advanced the global total. The U.S. market continued to decline. Western Europe had slow growth. Brazil and Russia continued to suffer – sailing in economic doldrums. The Russian light-vehicle market is tracking at -12% for the year in total, following on -10% and -35% declines in 2014 and 2015 respectively. Other East European markets improved a little, in total, last month.

The selling rate in China climbed to 29.3 million units a year in August. This was only slightly below the record-high rate in November 2015. Strong passenger vehicle sales continued, boosted by the “temporary tax” cut for smaller-engine cars. Light commercial vehicle (LCV) sales rose on a seasonally adjusted month-on-month basis. However, on a year-on-year basis, LCV sales continued to decline.

August US Light Vehicle sales at 1,511,000 was more than 4% down compared to August 2015. Nonetheless the U.S. is running at a selling rate of 17 million units a year. The ongoing sales gains by SUVs and crossovers did not offset the significant volume loss in the combined car segments – specifically mid-size cars that were once the staple of the Detroit Three. On average, automaker incentives were up 4.2% year-over-year. This tallies to $145 more per vehicle, partially offset by consumer transaction prices rising an average of $880 per vehicle. Consumer confidence increased month-on-month, but stayed equal to the previous year.

Canadian Light Vehicle sales for August came in at 172,000 units, representing a 1.9% decrease from August 2015. However, Canada YTD sales are up 3.4% in comparison with the same period last year.

In Japan, the selling rate rose to 5 million a year in August, up ~8% from a lackluster July. LMC says summer bonus payments from large corporations helped support sales. Nonetheless, falling corporate earnings due to the stronger yen, and the ambiguous global outlook continue to hurt confidence and spending on new vehicles.

After the expiration of the temporary tax cut in June, sales in South Korean remained weak. The August selling rate of 1.6 million units a year was better than July, but was a sharp slowdown from 2.1 million units/year in June. The government is now considering a diesel scrappage plan.

Now that the farce of the Olympics is over, Brazilians are returning to dealerships. The August selling rate of 2.1 million annual was 7.4% higher than the July rate. Consumer confidence has been on a steep rise, coinciding with the final stages of the impeachment  now ex-President Rousseff. The economy though is little improved, with high inflation and the depressed job market continuing to undermine consumer purchasing power.

In Argentina, the selling rate surged to a 2.5-year high of 793,000 annually in August, up 22% from July. LMC says that it is likely that consumers are rushing to buy durable goods, such as new cars, before their savings lose more value as a result of soaring inflation, which is up 47% YoY in June and July.

Ken Zino is an auto industry veteran with global experience in print, broadcast and electronic media. He has auto testing, marketing, public relations and communications expertise garnered while working in Asia, Europe and the U.S.
View all posts by Ken Zino →
This entry was posted in sales and tagged august global light vehicle sales, autoinformed, autoinformed.com, Ken Zino, lmc automotive. Bookmark the permalink.