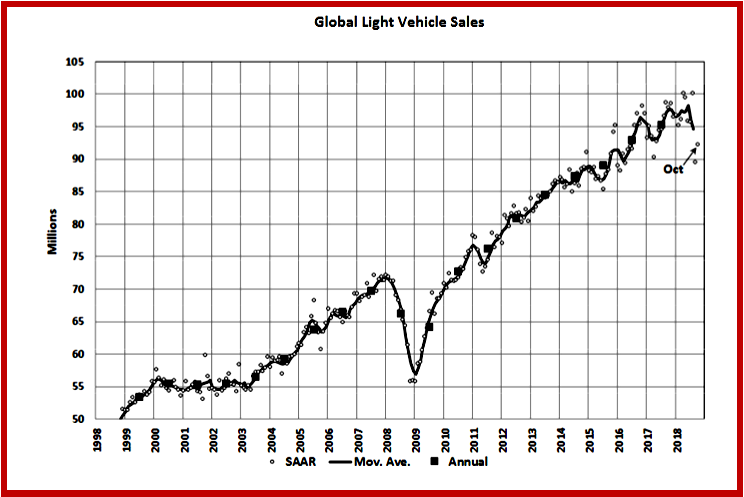 October Canadian sales also remained flat from 2017, inching up by 0.03%, to 165,000 units. This October performance translates to a selling rate of 2.03 million units/year, which marks the seventh month this year that it has been above 2 million units/year.

Mexican sales fell for the 17th consecutive month, declining by 4.8% YoY, with the 117,000 units sold – translating into a selling rate of 1.4 million units/year.

West European LV registrations fell by 5.6% YoY in October, as WLTP continued to cast a shadow over the new car market. The regional selling rate edged up to 14.6 million units/year, from 13.2 million units/year in September. This left the region just 1% up in YoY year to date (YTD) terms, with the fact that some models were slow to become available again due to WLTP testing backlogs impacting October’s sales. With these issues now mostly worked through, we expect some recovery in the rest of the year.

Turkey’s LV market has collapsed in recent months, with October sales down 76% YoY, prompting the government to cut automotive taxes for November and December.

Amid global uncertainty, the Chinese market continues to decelerate. The October selling rate was 26.2 million units/year, down 1% from September. On a YoY basis, sales fell by 11% in October, the fourth straight month of YoY decline. Sales of lower-end vehicles were hit hard, as economic growth in lower-tier cities slowed abruptly.

The Chinese market is now set to register its first annual decline this century. The slowdown in sales can be attributed to several factors:

1) Consumers are holding off on vehicle purchases in the expectation that the government will launch a purchase tax cut (not announced).

2) The government is cracking down on the shadow banking system that has financed vehicle purchases, especially in rural areas.

4) The planned implementation of the State VI emission standard in 2019 is delaying purchasing decisions.

The Japanese market accelerated in October, with the selling rate reaching a strong 5.5 million units/year. A very tight job market and slowly rising wages are helping to support consumer confidence and spending. On a YoY basis, sales increased by 12% in October, but that is because sales a year ago were depressed, as a result of the scandal at Nissan.

Sales in South Korea rebounded strongly in October after a weak September, due to distortions caused by the Chuseok holiday (in September this year, but in October last year). On a YoY basis, sales increased by 23% in October. With September and October combined, the selling rate averaged 1.77 million units/year, which is not exceptionally high, despite the ongoing temporary tax cut on Personal Vehicles.

In Brazil, the election of the far-right Jair Bolsonaro as the next President boosted not only the country’s financial markets, but also LV sales. The selling rate soared to 2.9 million units/year in October, the highest rate since early 2015. Yet, such a strong pace may not be sustained, given the still high unemployment rate and the government’s fiscal austerity measures.

The October selling rate in Argentina was 545,000 units/year, up marginally from a weak September. On a YoY basis, however, sales continued to plummet (-37% in October), in the face of the ongoing financial crisis. The deteriorating economic conditions suggest that sales have not bottomed out yet.