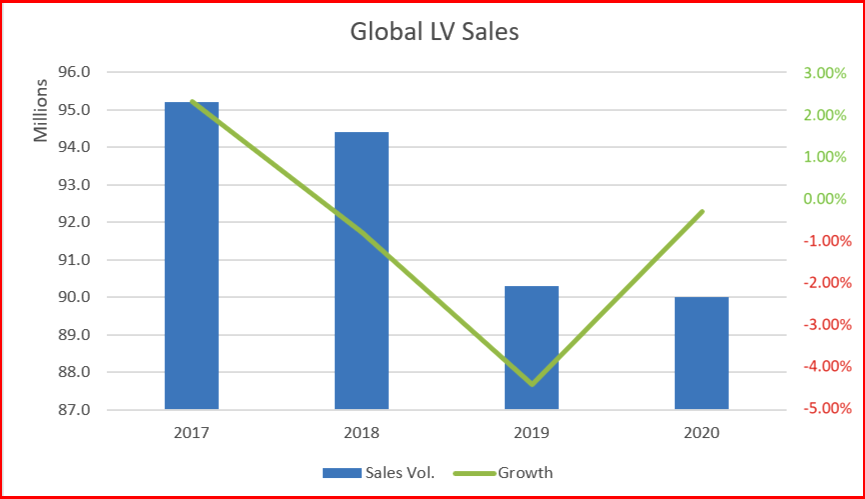 With 2019 as the second successive annual decline in global Light Vehicle sales, and a lifeless year projected for 2020, our friends at LMC Automotive are pondering whether we have reached peak auto. “Was the 2017 high of 95.2 million units the best we will ever see?”

LMC posits we must look at why the market has dropped 5 million units below the 2017 record. A recent blog entry entitled 2019 Review highlights some of the challenges faced by the auto industry. Chief among them are developments in China, with a protracted hangover from the temporary tax cuts of a few years ago, disruption coming from the launch of State VI-compliant vehicles (which varies region by region), along with a slowing economy.

“The year-on-year declines in China have been slowing and with some progress in the US-China trade negotiations, consumer and business confidence are set to improve, thus increasing the prospects of greater market stability,” LMC notes.

LMC does not see a speedy turnaround in fortunes, with this year’s global market unlikely to improve on the 2019 result.

Still, in whistling while walking past the graveyard, as the coronavirus outbreak continues to spread across China, the worlds largest and arguably the most influential market,  LMC maintains that the market will avoid another major contraction.

Looking at the immediate past, year-on-year declines in China have been slowing and with some progress in the US-China trade negotiations, consumer and business confidence are set to improve, thus increasing the prospects of greater market stability. Here LMC notes “that the rapidly evolving situation related to the coronavirus outbreak could yet alter this view.”

Elsewhere, the consultancy remains optimistic: “some of the more heavily hit markets are likely to be close to bottoming out. In the short term, however, the mature markets of Western Europe and the US are unlikely to provide any real support. Western Europe is grappling with slow economic growth and uncertainty over automakers meeting binding EU emissions targets, while competition from the used car market is set to hold back US new vehicle sales, and the risk of tariffs may lead to higher vehicle prices.”

“The 2017 record is unlikely to be eclipsed in the next few years and it is probably fair to say that in high-income cities, with heavy congestion and alternative transportation, auto ownership has peaked. Given the low (but growing) levels of car density in China and India alone, there remains the potential for solid growth to meet mobility requirements,” claims LMC.

“In short though, we do expect the global market to reach new record highs in the first half of this decade. In the many markets that have not yet reached maturity, as income grows, vehicle ownership becomes a more affordable prospect. We therefore continue to see parc levels rising globally, which bodes well for replacement demand. Meanwhile, the global population continues to expand, thus raising mobility demand. Even in a mature market like Japan, where the adult population is in decline, both the car parc and car density (cars in use per 1,000 adults) continue to increase – and this is by no means an isolated case.

“Given the low (but growing) levels of car density in China and India alone, there remains the potential for solid growth to meet mobility requirements, particularly as some of the more immediate headwinds ease. Beyond China and India, economic recession explains why several key non-mature markets have been struggling recently, but this is unlikely to persist indefinitely.”

1 Response to Global Light Vehicle Sales Slump. The Party’s Over?