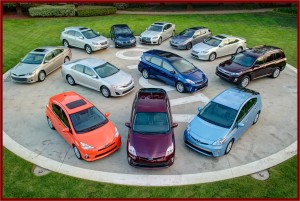 Toyota’s hybrid vehicle sales in the United States began in July 2000 with the first-generation Prius.

Worldwide sales of Toyota Motor Corporation hybrids are now greater than 5 million as the Japanese automaker continues to lead all other automakers. During 2012, hybrid vehicles accounted for 14% TMC’s global vehicle sales and 40% of its vehicle sales in Japan. Toyota is now selling 19 hybrid models and one plug-in hybrid model in 80 countries. Between now and December 2015, TMC will launch 18 new hybrid vehicles worldwide.

“We had to develop a hybrid system from scratch, making our task extremely difficult,” said TMC Vice Chairman Takeshi Uchiyamada, who was responsible for development of the first-generation Prius, the world’s first mass-produced hybrid passenger vehicle.

Toyota had been excluded from participating in a multi-billion dollar U.S. Government program that subsidized the national labs and GM, Ford and Chrysler to develop 80 mpg cars. The so-called partnerships for a New Generation of Vehicles ended in failure with no cars other than a few prototypes produced.

Nearly 2 million – 1,951,243 – Toyota and Lexus hybrid vehicles have been sold in the United States. Of the 12 U.S. models, Camry Hybrid, Avalon Hybrid and RX 450h are manufactured in North America with a fourth model, Highlander Hybrid, planned. Toyota and Lexus comprise 70% of the U.S. auto industry’s total hybrid sales to date, while they account for 16% of overall Toyota and Lexus sales, both globally and locally. Total industry hybrid sales are roughly 3% of the nation’s car market.

Toyota estimates that its global fleet of nearly 20 hybrid vehicles has resulted in approximately 34 million fewer tons of CO2 emissions than those emitted by gasoline-powered vehicles. In addition, Toyota estimates its hybrids have saved owners more than 3 billion gallons of gasoline compared to gasoline-only powered vehicles. When the Prius launched in December of 1997, it was met with considerable skepticism form German and Detroit Three automakers. All have since embraced the technology, including Nissan, which showed its first hybrid at the New York Auto Show in March.

“With more than 50 hybrid vehicle models from various manufacturers available in the U.S. today, hybrids on the road are saving nearly 500 million gallons of petroleum annually in this country,” said Tony Markel, senior engineer with the U.S. Department of Energy’s National Renewable Energy Laboratory.

“The first Prius was a surprising success and we never imagined the market would become as vast as it has for the hybrid powertrain,” said Bob Carter, TMS senior vice president of automotive operations.

Ken Zino is an auto industry veteran with global experience in print, broadcast and electronic media. He has auto testing, marketing, public relations and communications expertise garnered while working in Asia, Europe and the U.S.
View all posts by Kenneth Zino →
This entry was posted in auto news, electric vehicles, milestones and tagged autoinformed, autoinformed.com, doe, hybrids, Ken Zino, partnership for a new generation of vehicles, prius, toyota. Bookmark the permalink.