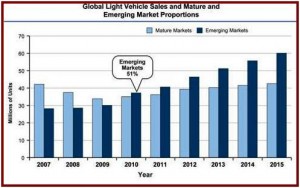 The marketshare of global light-vehicle sales coming from so-called “emerging” markets has surpassed share from economically mature regions, led largely by growth in China, according to J.D. Power and Associates.

“Mature markets like the United States, Western Europe and Japan are only expected to return to pre-recessionary sales levels by 2015, and during that period they will be overshadowed by exponential growth in China, India, Brazil and Russia, said John Humphrey, senior vice president of automotive operations at J.D. Power and Associates. “With China at the forefront, emerging markets have overtaken mature markets, and will continue to be the primary source of growth for the sector going forward.”

Global light-vehicle sales are expected to increase from 77 million units in 2011 to 103 million units in 2015. By 2020, global sales are projected to total 125 million units. Of this total, the BRIC countries (Brazil, Russia, India and China) are expected to account for 57.7 million light vehicle sales (46% of the global total). Moreover, each of these countries has high potential for exports, so their combined production should account for an even greater percentage of global output in 2020.

To put the impact of the emerging markets growth into perspective, Humphrey said that while it took approximately 95 years to get the first 500 million passenger vehicles in operation simultaneously (achieved in 2010), with the addition of the emerging markets, it will only take another 20 years for units-in-operation on the world’s roads to exceed one billion.

This shift in global auto sales will be a major obstacle thwarting efforts to control or reduce emissions from internal combustion engine (ICE) vehicles, according to Power. Countries that are still developing economically and technologically may be less inclined (or capable) of keeping pace with global norms and standards for emission reductions. Furthermore, vehicle buyers in these markets tend to be more sensitive to price pressure than are buyers in economically mature markets, which favors sales of traditional vehicles. It is unlikely that buyers in developing markets will tolerate the price premium charged for hybrid-electric or battery electric powertrains, with the price differential expected to average approximately $11,000.

“Although some governments are taking steps to reduce auto-related carbon emissions, the sheer volume of vehicles being added to the global fleet over the next decade will largely negate these efforts,” said Humphrey. “The global growth pattern points to vehicle carbon emissions and overall air quality getting worse before they get better.”

For the world’s automakers, the global shift in growth toward emerging markets bears significant implications, as vehicle manufacturers will need to reassess their global strategic priorities and re-allocate resources to meet this new market paradigm.

Most new investments in vehicle production will be shifted to these new markets (particularly in Asia), and these new production plants will need to be supported with investment by automotive tooling and component manufacturers. In addition, global vehicle design and engineering operations will be driven more extensively from Asia to serve local market tastes and more global sourcing decisions will be made in Asia, as the region will account for the greatest concentration of production and sales.