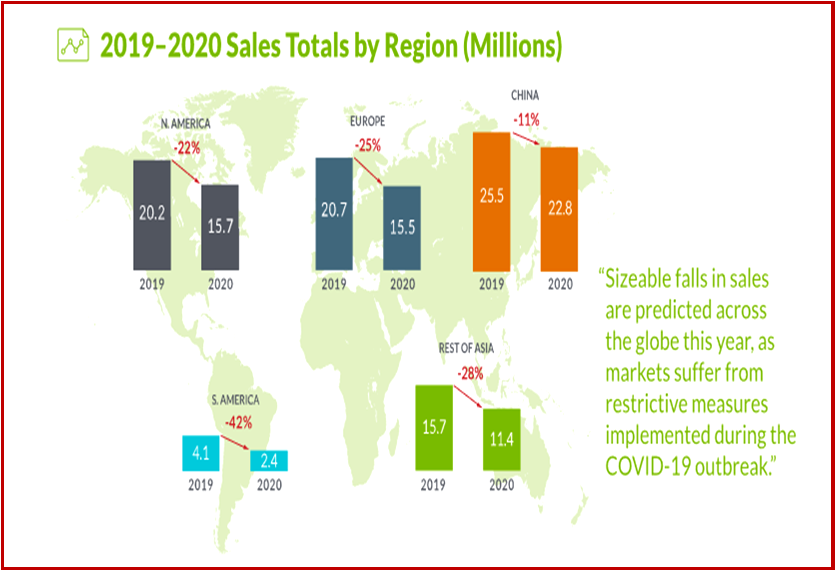 The Global Light Vehicle selling rate improved to 61.5 mn for May, from 49 mn in April, reflecting then easing lockdown measures, according to respected consultancy LMC. The global selling rate is now predicted to reach the 80 mn units/year mark towards the end of 2020 down from 90.3m, assuming there is no major second wave of COVID-19.

This now looks like a long shot to AutoInformed with the US leading the way in spreading new infections and fatalities from the maskless and clueless Trump misadministration.  In the US, a repetition of the ‘cash for clunkers’ scheme could potentially lift sales, “but this has yet to be fully debated or agreed,” says LMC.

The world’s largest vehicle market, China will see relatively lower year-on-year fall in sales, “having dealt with the virus swiftly and efficiently,” says LMC. The selling rate in China bounced back at 26 million units/year for May, demonstrating a strong V-shaped recovery. There was no central government support beyond incentives already in place.

South America sales are forecast to fall 42%, with the region’s largest market, Brazil, being heavily affected by the pandemic and sharp economic contraction.

“European outlook for this year remains weak, though some support from government will come in the form of incentives — often with an EV focus,” says LMC. “Emerging incentive schemes in Europe are  generally focusing on the promotion of cleaner technologies. Of the confirmed new national incentive schemes for Europe’s key markets, the German and French plans are those most favorably skewed towards pure BEVs. 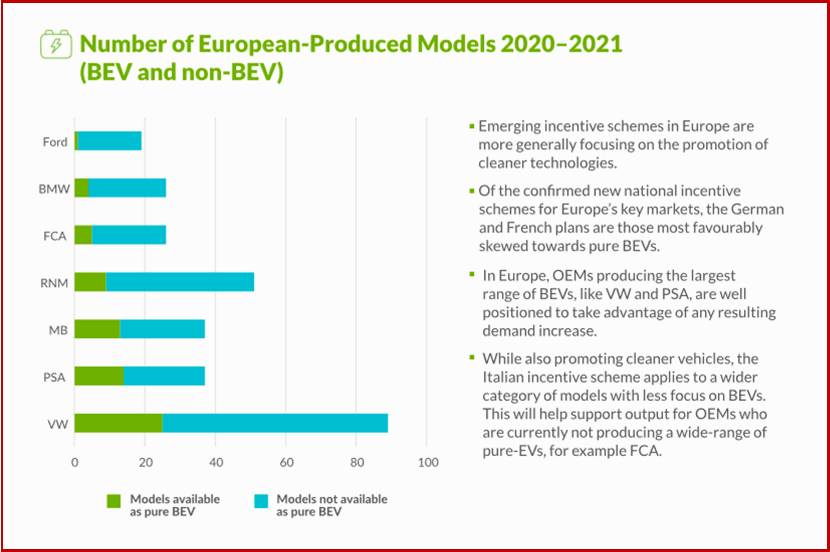 Incentives may help but naturally they would disproportionately help the rich.

“In Europe, OEMs producing the largest range of BEVs, such as VW and PSA, are well positioned to take advantage of any resulting demand increase.  While also promoting cleaner vehicles, the Italian incentive scheme applies to a wider category of models with less focus on BEVs.  This will help support output for OEMs who  are currently not producing a wide-range of pure-EVs, for example FCA whose home market is Italy.