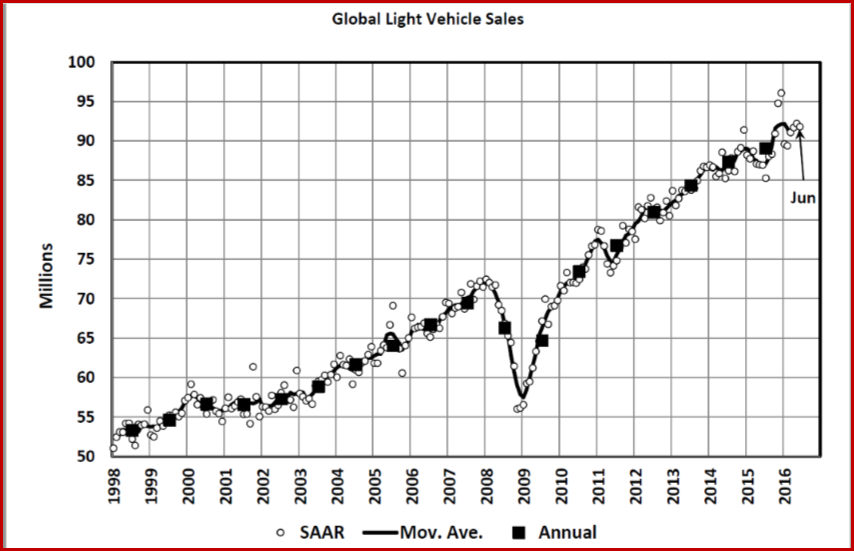 Global vehicle sales held steady with a third consecutive month at just under a 92 million annual rate. The European and Chinese markets held their positions as key aspects to sustained global volume, although softening in the US was evident. (See U.S. Auto Sales to Drop During 2016-2023?) the evenness of markets in Russia and Brazil has also continued.

According to preliminary data from LMC, the Chinese market remained robust with a selling rate just under 27 million units a year in June, the same as in May. However, the discrepancy between passenger vehicles and light commercial vehicles is ongoing, with PV sales increasing by~11%, while LCV sales declined by ~11% year-on-year during the first half of 2016.

After the UK’s Brexit vote (See ‘Bloody Hell,’ What Does Brexit do to Automakers?), the yuan has weakened against the US dollar, but Chinese stock indices have barely moved. Since the EU is China’s second largest export market – almost as large as its top export market, the US, –  China’s exports could be hurt by the ongoing Brexit consequences as they are struggling to recover from a deep slump. Increased global uncertainty could also hurt business and consumer confidence – and thus vehicle sales.

In Japan, the June selling rate of 4.7 million annually was unchanged from May. On a year-on-year basis, however, Mini Vehicle sales plummeted by 18%, likely by scandals over fuel efficiency (See  Nissan Buys 37% of Scandal-Beset Mitsubishi Motors for $2.2B). Non-Mini Vehicle sales posted a 3% gain. The Japanese government has decided to postpone a planned consumption tax hike to October 2019, amidst increased global uncertainty.

In South Korea, the selling rate as a record high of 2.1 million annually, likely ahead of the expiration of the temporary tax cut in June. In the wake of the UK’s Brexit vote, the central bank has cut interest rates and the government is planning to launch another round of tax incentives for vehicles, which should keep the market growing.

Ken Zino is an auto industry veteran with global experience in print, broadcast and electronic media. He has auto testing, marketing, public relations and communications expertise garnered while working in Asia, Europe and the U.S.
View all posts by Ken Zino →
This entry was posted in sales and tagged autoinformed, autoinformed.com, global vehicle sales, Ken Zino. Bookmark the permalink.