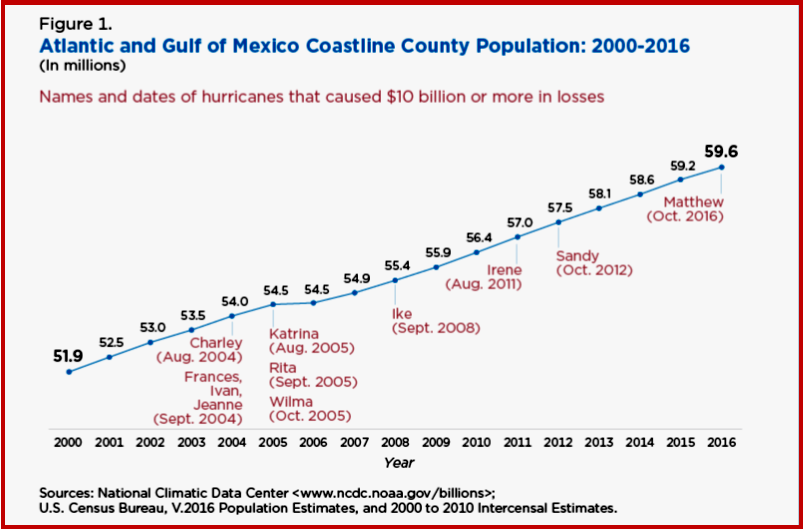 Harris County, Texas, which includes Houston, accounted for a large share of the Gulf of Mexico growth.

The U.S. Census Bureau’s 2016 population estimates show that coastline counties contain some of the country’s largest centers of population and economic activity. The latest decades have seen costly and damaging hurricanes in the Atlantic and Gulf Coast regions. However, these areas have also continued to experience population growth. Their combined population increased from 51.9 million in 2000 to 59.6 million in 2016.

“With the exception of 2005 to 2006, a year marked by an intense hurricane season that included three of the costliest hurricanes on record (Katrina, Rita and Wilma), the population in Atlantic and Gulf Coast counties grew every year from 2000 to 2016,” says Darryl T. Cohen is a geographer in the U.S. Census Bureau’s Population Division.

Glug, Glug – the Gulf of Mexico

The population of coastline counties in the Gulf of Mexico region increased by more than 3 million people, or 24.5% from 2000 and 2016, the fastest growth among coastline regions. By comparison, the United States grew by 14.8% over the same period.

Harris County, Texas, which includes the city of Houston, accounted for a large share of the Gulf of Mexico region’s growth. It added about 1.2 million people over the period, a 35% increase since 2000 and the largest numeric gain of any county in the country.

The Gulf Coast’s high rate of population growth, along with post-hurricane rebuilding efforts, have contributed to a robust construction industry.

According to the American Community Survey 2012-2016 5-year estimates, about 8.4% of the area’s workforce was employed in construction industries, a higher rate than the other coastline regions (6.2% in the Atlantic region and 5.8% in the Pacific region) and the United States as a whole at 6.3%).

The Gulf of Mexico had a higher percentage of its workforce employed in natural resources, construction, and maintenance occupations (10.8%), compared to the other coastline regions (7.8% in the Atlantic region and 8.0% in the Pacific region) and to the United States as a whole (8.9%).

Estimates of county characteristics for 2016 showed that coastline counties were more ethnically and racially diverse than the United States as a whole.

The Pacific was the most diverse of the coastline regions with 58.4% of its population identifying their race/ethnicity as other than non-Hispanic white alone.