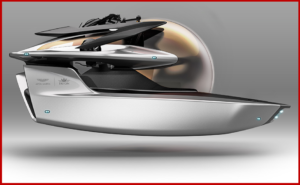 The latest twist in promoting expensive cars. But will it, ahem, float?

Aston-Martin is calling it, appropriately, Project Neptune, but for those knowledgeable about the brand it may as well be from Mars as Aston is working with Triton on designing submarines. Yes – it’s too early for April Fool’s Day spoofs – the storied purveyor of sports cars and fierce competitor and sometimes winner in the world greatest sports car races for almost a century is going underwater once again, not from lack of finance but deliberately.

In the latest example of what has become of the luxury car business as it has evolved into a giant complex of experience, outside the car racing and/or business celebrity, superegos – always there – but now reinforced with borrowed interest from people who are famous for being famous as laughable “brand ambassadors.” In AutoInformed’s view, if you need someone else to reinforce or justify your purchase of an insanely expensive car, then you shouldn’t be playing the game because you are being gamed.

In the deal at sea appropriately announced at the Monaco, Aston Martin Consulting will work on a partnership that it claims will lead to an exclusive, strictly-limited edition submersible Project Neptune takes Triton’s three-person platform as a basis upon “to explore a new iteration of Aston Martin’s progressive design language.”

“Project Neptune is defined by its sleek, elegant exterior,’ gushed Aston Martin Executive Vice President and Chief Creative Officer Marek Reichmann, “We have used forms and proportions that express the same devotion to design, engineering and beauty that shape our cars, such as the Aston Martin Valkyrie hypercar project.”

But Will It Float?

Triton has experience in the design, manufacture and operation of submersibles for researchers, explorers and – no surprise – superyacht owners. Founded in Florida by L. Bruce Jones and Patrick Lahey, Triton makes what it claims are the safest and best performing, deep-diving submersibles in the world.

That said, the submersible market as we understand it serves budgets from hundreds of thousands to millions of dollars. Depth and capacity are the two biggest price drivers, according to Triton. It’s more com-plex than that – as is the deep sea: Other critical factors include: Certification, Training, Internal Space, Passenger Visibility and Comfort, Maintenance and Warranty.