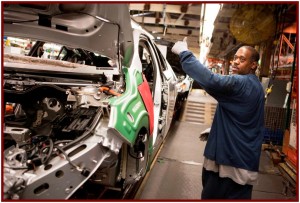 During the next few months, GM will make more investment announcements, dependent on successful completion of state and local incentives.

Earlier this month GM said Detroit-Hamtramck Assembly plant will close for four weeks beginning this June for changes needed to increase Chevrolet Volt production at the site. At the time GM said tooling would also be added for assembly of the new 2013 Chevrolet Malibu midsize sedan, a story AutoInformed broke, but GM did not disclose the large increase in jobs that was planned. (See New 2013 Chevrolet Malibu to be Built in Hamtramck, MI)

“Filling this plant with new work is very satisfying because GM is dedicated to helping rebuild this city,” GM North America President Mark Reuss said at the plant Wednesday. “We are confident in the flexibility of the plant, the excellence of our workers and the great cars assembled here.”

GM said in early May that it will invest about $2 billion in U.S. assembly and component plants retaining more than 4,000 jobs at 17 facilities in eight states. GM Chairman and CEO Dan Akerson made the announcement during an event at a 54-year-old Toledo, Ohio transmission plant. Toledo is being upgraded to build 8-speed automatic transmissions.

During the next few months, GM said it will make specific facility investment announcements dependent on successful completion of state and local incentives in some communities.

Critics, of course, say the cost per job is exorbitant – when you total all the loans, tax breaks and tax loss carry forwards at GM (and Chrysler) that normally are wiped out during bankruptcy, especially since what is mostly going on these days is the retention of existing jobs. (See also Ford will invest $400 million in its Kansas City Assembly Plant)