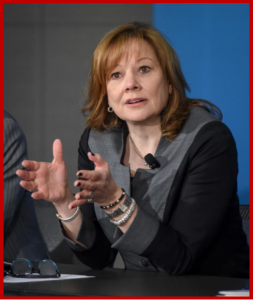 In an acknowledgement of GM’s poor returns to shareholders, CEO Mary Barra said, “as much as we like this recognition, we are focused on achieving even stronger performance and enhancing long-term shareholder value in the years to come.”

GM earnings have been pommeled during the last several years because of billions in charges taken for safety recalls.

GM has now largely put back together its failed GMAC financial arm under the newer GM Financial. GMAC, aka Ally, Humpty Dumpy like, took a great fall into bankruptcy during the Great Recession when Wall Street firms peddled bad bonds particularly in the housing market that the ratings agencies endorsed as investment grade.

Ken Zino is an auto industry veteran with global experience in print, broadcast and electronic media. He has auto testing, marketing, public relations and communications expertise garnered while working in Asia, Europe and the U.S.
View all posts by Ken Zino →
This entry was posted in financial results, recalls and tagged autoinformed, autoinformed.com, gm credit ratings, gm earnings, Ken Zino. Bookmark the permalink.