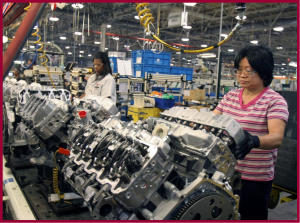 The new investment it’s claimed will create more than 100 new manufacturing jobs at the Brookville. Preliminary work has begun and construction on the new facility will be completed by the end of 2020. When the new Brookville site is up and running, it will operate concurrently with the current DMAX operations in Moraine.

Heavy-duty trucks comprise 25% of full-size pickup sales in the U.S. The all-new Chevrolet Silverado and GMC Sierra HDs are expected to create GM growth in the HD pickup segment. GM has consolidated heavy-duty pickup production at its Flint, Michigan truck assembly plant, where the company has installed new body and paint shops and created 1,000 new jobs to support a capacity increase of 40,000 units compared to the outgoing model.

GM’s launched its all-new family of Chevrolet Silverado and GMC Sierra HD pickups earlier this year and began shipping the all-new HDs to dealers in July and will build dealer inventory levels through the first half of 2020.  The company is increasing production of crew cab and diesel models to meet growing customer demand.

Maximum towing power and capability in the all-new Silverado and Sierra HDs come from the proven Duramax 6.6-liter V8 turbo-diesel.   The Duramax diesel and Allison transmission are a saleable combination in the HD truck market. DMAX has built more than 2 million diesel engines since the facility opened in 1999.  DMAX currently employs nearly 900 and its 670 hourly employees are represented by IUE-CWA Local 755.