GM Annual Report Says No Dividend is Planned for Common 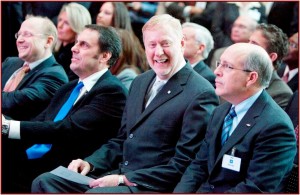 GM Vice Chairman Stephen Girsky (l to r), N.A. President Mark Reuss, retiring Vice Chairman Tom Stephens, International Operations President Tim Lee at a reception at GM headquarters in Detroit following the close of trading on the first day as a public company. GM stock is now languishing at ~$26 a share, down from the $33 IPO.

In its annual report just filed with the Security and Exchange Commission, General Motors (NYSE: GM) said, “we have no current plans to commence payment of a dividend on our common stock.”

Even though GM common stock traded as high as $39.48 a share – arguably irrational exuberance by small investors after what now appears to be a high IPO price of $33 in November of 2010 – the financial condition of the GM is not strong enough to distribute money to common shareholders. This affirmation comes even though GM posted a record $9.1 billion profits in 2011.

The GM results were modest at 5.5% of revenues, coming after GM’s first full year as a publicly traded company, and a year where Japanese automakers were out of the market for six or more months because of natural disasters, which GM was unable to capitalize on.

Even if the GM balance sheet were healthier and cash flow stronger, no dividend can be paid until all accrued and unpaid dividends have been paid on the U.S. and Canadian government held Series A Preferred Stock – $6.9 billion or $25/share redeemable staring in 2014. There is also Series B Preferred, which was issued during the bankruptcy to cover Delphi and GMAC obligations and is convertible into common.

The interest payments on both classes of preferred amounted to $864 million during 2011. Even here, there is yet another caveat. GM’s current revolving credit agreements – needed to fund day-to-day operations – also contain restrictions against dividends on common until the preferred shares are taken care of. And GM has other big obligations its needs to heed. GM has more than $25 billion in unfunded pension obligations, $14.2 in the U.S. alone.

The U.S government still holds a 32% stake (~27% fully diluted) in GM. All told of the 1,565,761,986 shares of GM common stock issued and outstanding on 15 February 2012 about 55% were held by the Treasury, Canada GEN Investment Corporation and the UAW Retiree Medical Benefits Trust, and GM’s U.S. hourly and salaried pension plans.

There is one – highly unlikely – exception. GM can issue more shares of common, as a dividend on common, but that would dilute the stock further and decrease its value from the current $26 trading range.

In addition, there is another problem looming for common shareholders. If any of the large holders of common decide to sell their shares, or even if the markets perceive they are about to, then common shares will likely drop in value. Moreover, the interests of the large shareholders are not necessarily in the best interest of GM.

The upcoming presidential election looms large. The two parties have diametrically opposed positions regarding the auto bailout. The current Obama Administration appears to be standing pat, and holding onto the stock for the near future. The Republicans, if you can believe their extreme rhetoric, appear to be poised to dump the stock regardless of the consequences.