Where this leaves Opel is unclear. Opel leads GM engineering on small and mid-size cars. Stephen Girsky, GM vice chairman, said during a media call that under the governance structure with 4 representatives from each partner that Opel would have “influence.”

General Motors and PSA Peugeot Citroën today announced the creation of an alliance that the companies claimed will leverage the combined strengths of both, contribute to their profitability, and “strongly improve” their competitiveness in Europe.

PSA already has partnerships with Ford, Toyota, BMW and Mitsubishi on components and engines. A previous GM alliance started in Europe with Fiat in 2000 failed in 2005 when GM spent $2 billion to buy its way out of a put option in the deal that allowed Fiat to sell its automotive company to GM for market value. Globally, alliances have had mixed results at automakers. 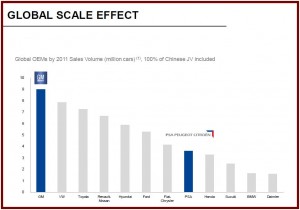 The total synergies expected from the alliance are estimated at approximately $2 billion annually within about five years.

GM has been losing money at it European Opel/Vauxhall division for more than a decade – $700 million in 2011 alone. The European vehicle market is heading for its fifth straight year of declining sales.

Both chairman Dan Akerson of GM and Philippe Varen of PSA said the strategy was not intended to reduce capacity in Europe at either company, a politically sensitive as well as a contractual issue at Opel and Peugeot and Citroen.  Therefore, it appears each company is on its own sorting out their immediate European problems.

PSA said it will raise approximately €1 billion by issuing new shares through a syndicate of banks and including an investment from the Peugeot Family Group. The capital raised will be used to develop new vehicles with GM. As part of the agreement, GM plans to acquire a 7% equity stake in PSA Peugeot Citroën, making it the second-largest shareholder after the Peugeot Family Group. There are no put or call options in the new alliance. Nor is there a provision regarding the governance of PSA Peugeot Citroën by GM. GM said it does not intend to increase its stake beyond 7%. Peugeot said it would be its capital to finance new products and not buying a piece of GM.

The alliance is structured around the sharing of vehicle platforms, components and modules; and the creation of a global purchasing joint venture for the sourcing of commodities, components and other goods and services from suppliers with combined annual purchasing volumes of approximately $125 billion. The chairmen of both companies stressed they will continue to market and sell its vehicles independently and on a competitive basis.

The total synergies expected from the alliance are estimated at approximately $2 billion annually within about five years. The synergies will not come until new vehicle programs are implemented in so-called low CO2 platforms, as well as additional products in the B small car and D mid-size segments, with limited results predicted during the first two years. It is expected the synergies will be shared about evenly between the two companies.

Where this leaves Opel in GM is not immediately clear. It was the lead at GM engineering for both small and mid-size cars. All Stephen Girsky, GM vice chairman, said during a media call was that under the governance structure with 4 senior representatives from each partner Opel would have “influence” on the alliance.