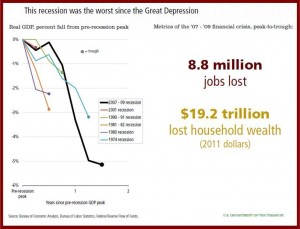 The facts say the U.S. economy is stronger today because of the bailout strategy our legislators adopted. And maybe it won’t happen again under the weak financial reforms now being put in place in the face of fierce opposition from the same Wall Street crooks responsible for the financial crisis and Great Recession. To supporters these were the crucial first steps on the long road to economic recovery.

Ally Financial, formerly GMAC, will sell its credit operations in Europe and Latin America and its share in a joint venture in China to General Motors Financial Company. The deal is expected to close in steps during 2013. The transaction includes auto finance operations in Germany, the U.K., Austria, France, Italy, Switzerland, Sweden, Belgium, the Netherlands, Luxembourg, Brazil, Mexico, Colombia and Chile, as well as a 40% equity stake in a joint venture in China. The combined operations in Europe and Latin America represented ~$16.1 billion in assets at the end of the third quarter 2012.

GM said that with addition of Ally’s international operations, GM Financial will be able to provide credit for customers and dealers in markets that make up about 80% of GM’s global sales. In essence, GM is recreating GMAC.

GM established GM Financial in 2010 to add captive financing in the United States and Canada since it had sold off its share of bankrupt Ally, which along with General Motors survived the 2008 market crash only because of billions in taxpayer subsidies for the needed financing to reorganize. Under the deal, GM Financial assets would double to about $33 billion; consolidated debt, would increase to $27 billion from about $12 billion. GM estimates annual earnings of $300 million or more.

Ally will receive an approximately $550 million premium to book value, the company claimed, which for the third quarter of 2012 was approximately $3.7 billion. Currently, GM owns 9.9% of the common equity of Ally through an independent trust. Ally has historically provided most of the financing for GM’s dealers and a significant portion of the financing for its customers in the U.S. and Canada and other major international markets. Ally has been GM’s exclusive financing partner for incentivized retail financing programs in its major markets.

“In May, we began a process to pursue alternatives for our international operations in an effort to accelerate repayment plans for the U.S. Treasury’s remaining investment,” said Ally Chief Executive Officer Michael A. Carpenter. “This transaction represents the third and final agreement in recent weeks toward those goals, and, combined, these sales are expected to generate approximately $9.2 billion in proceeds.”

The U.S. Treasury, courtesy of taxpayers, currently holds about 74% of Ally common equity, and $5.9 billion in mandatory convertible preferred securities, which have a dividend rate of 9%, after a more than $17 billion bailout. Ally at the end of Q3 2012 had about $182 billion in assets, so it increasingly looks like taxpayers have a good chance at getting their money paid back, perhaps turning a profit.

Taxpayers also hold 32% of GM stock, and are owed $32 billion for the $50-billion bailout in 2009. It remains an open question whether Treasury will ever recoup its investment since GM stock would have to trade above $52 a share – currently at $25 – to break even. A prudent strategy at this point is for the U.S. Treasury to hold on. (1)

In October, Ally announced it was selling its Mexican insurance subsidiary, as well as its auto finance and deposit businesses in Canada. With the agreement to sell the operations in Europe, Latin America and the joint venture stake in China, Ally will have exited the international markets. In total, these transactions are expected to generate proceeds of approximately $9.2 billion, based on third quarter 2012 tangible book value of $7.6 billion, which reflects a premium of approximately $1.6 billion, or 21%.

(1) From the Congressional Budget Office Report – October 2012: General Motors (GM) and Chrysler, along with their associated financing intermediaries, received just over $79 billion in TARP funds. In addition, the federal government offered to guarantee $5 billion in loans to parts manufacturers for GM and Chrysler, but only $413 million of such loans occurred, bringing the total assistance to the automotive industry to nearly $80 billion. About $37 billion of that amount remains outstanding. The total subsidy cost for that assistance will be $20 billion, in CBO’s estimation.

GM and Chrysler. Following the bankruptcy proceedings of GM and Chrysler, Treasury agreed to exchange the debt positions it held in the original companies for a blend of debt, equity, and preferred shares in the newly configured companies—“New GM” and “New Chrysler”—that emerged after bankruptcy. Since then, the Treasury has recouped roughly $31 billion of the $61 billion invested in the two companies through repurchases of debt and preferred stock, as well as the sale of common stock; the Treasury has also written off or realized $7 billion in losses on its investments in GM and Chrysler. The government retains about 33% of New GM’s equity and almost $1 billion in debt obligations of “Old GM,” which remains in bankruptcy as Motors Liquidation Corporation. The Treasury has no remaining investment in Chrysler, having sold all of its shares on July 21, 2011, for $560 million.

Financing Intermediaries. The Treasury provided $19 billion in financial assistance to GMAC (General Motors Acceptance Corporation) and Chrysler Financial, of which about $15 billion remains outstanding. On March 2, 2011, the Treasury sold nearly $3 billion of referred shares of Ally Financial (formerly GMAC); the remainder of the $17 billion investment in that company consists of $6 billion in preferred stock and ownership of 74% of the company’s equity. In addition, Chrysler Financial received $1.5 billion in assistance, which it fully repaid on July 14, 2009.