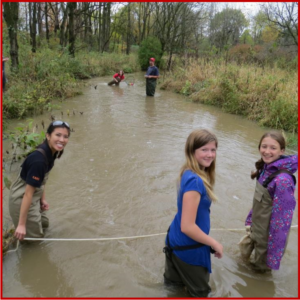 A GM mentor from CAMI Assembly and local students test water quality in Halls Creek during a GM GREEN event in Ingersoll, Ontario. The strike is about community survival.

Negotiations between the powerful Canadian union Unifor –  more than 310,000 members in every major sector of the economy – and its Local 88 and CAMI automotive in Ingersoll remain stalled after General Motors rejected Unifor’s latest offer of settlement. The strike is now in its second week.

The main obstacle in negotiations remains job security as the union is seeking a commitment that the Ingersoll plant will remain the lead producer of the Equinox vehicle. Unifor identified this issue as its top priority in bargaining. Over the last couple of days, the Master Bargaining Committee, along with Unifor National Representatives, had a series of disappointing meetings with the company. GM is currently silent on the impasse, which has broad international repercussions for the multi-national automaker. (GM CAMI Workers on Strike in Canada, NAFTA at Root)

“If you want to see what a NAFTA-caused race to the bottom looks like, go to Ingersoll, Ontario,” said Jerry Dias, National President of Unifor. “In that picturesque town west of Toronto, workers at the CAMI automotive plant are on strike over a reasonable proposal that their employer, General Motors of Canada, refuses to accept – enhanced job security language.”

At this point in talks GM remains unwilling to address the issue of job security. Ironically, this comes as Chevrolet is celebrating the hundred anniversary of the 1918 One-Ton a traditional truck, unlike the crossover that is the Equinox.

“All we are asking is that this quality work and award-winning production remain in Ingersoll and a contractual commitment that CAMI will retain its lead producer status for the Equinox,” said Dias.  “This is about making a commitment to maintain a future for good union jobs in the Ingersoll community.”

In July, GM ended production of the Terrain vehicle in Ingersoll and moved the work to Mexico.  The Ingersoll plant now only produces the Equinox, which is also manufactured in Mexico since early in 2017 at two plants.

“The resolve of the Local 88 membership is strong. We all recognize how important it is to secure production at our plant,” said Unifor Local 88 President Dan Borthwick.

Bargaining Committee Chairperson of Local 88 Mike Van Boeke said, “Although these negotiations directly affect Local 88 members, this is a community fight. It’s about the future of Ingersoll and jobs for all of us.”