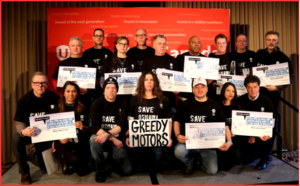 In December sales were down before the formal Unifor boycott announced in January against GM products was underway but after the GM cutbacks were decreed – sales tallied just 13,855 down from 19,801 during December 2017. That’s ~-30% drop-off.  (Unifor Boycott Threatens Damage for Ontario Workers GM Says, GM to Invest $22 Million in Spring Hill for Big V8 Engines)

The boycott against GM for its Canadian job cuts and the closing of the award winning – for productivity and quality – Oshawa plant in violation of its Unifor union contract announced at the end of last year is having a negative effect on Canadians’ purchase consideration.

This non-buy backlash comes after Canadians contributed roughly $4 billion dollars in loans, bailouts and stock purchases to help save GM from a well-earned bankruptcy during the Republican Great Recession.

“Our strategy remains disciplined for 2019 focused on bringing great new vehicles and technologies to market that appeal to the diverse driving needs of Canadians,” said Scott Bell, vice-president, sales, service and marketing for GM Canada. “With the best new lineup of pickups in Canada, strong crossover entries across our brands, three all-new vehicle launches for Cadillac, we are well positioned to grow our sales.”

Well, maybe, but the lineup of citizen taxpayer non-buyers appears to be growing every month. Once again the debate over spending good taxpayer money to prop up bad businesses is worth it? The shrinking middle class – a Western nation problem will loom large in upcoming elections. Self-interested elites have a lot of explainin to do about the effects of their subsidize the wealthy policies.