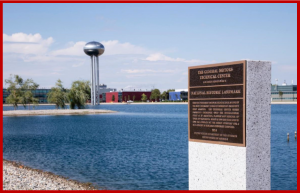 General Motors today unveiled a 5-foot-tall, 1,200-pound white granite marker at its Warren Tech Center because of its selection as a National Historic Landmark. At the same time, Volkswagen was announcing at the Center for Automotive Strategy conference in Traverse City Michigan that it is establishing a tech center in the U.S. This will become a permanent home for its so called North American Engineering and Planning Center. This tech center will unite Volkswagen’s research and development, and product planning efforts in the southern American city of Chattanooga.

In a way, this is symbolic of the geographic, business and philosophical shifts in the automobile business that now sees VW Group as a contender along with Toyota and GM as the world’s largest automaker. Another irony is that when the GM Tech Center was established in 1956, it was a vertically integrated company with clear market dominance, which it no longer is.

VW in the 1950s was then a post WW2 fledgling company – subject to Marshall Plan charity, but now it is, arguably, more vertically integrated than post-bankruptcy GM and just as strong globally.

The National Park Service selected the GM Tech Center campus for the honor because it has national significance as one of the works of famed architect Eero Saarinen.

The dedication of the GM marker, which required a crane and several people to guide it into place, was attended by Executive Vice President of Global Product Development, Purchasing and Supply Chain Mark Reuss and Vice President of GM Global Design Ed Welburn.

“When the GM Tech Center was dedicated in 1956, it was the pinnacle of engineering, design and advance technology,” Reuss said. “We recently announced a $1 billion investment that will bring new construction, significant renovation and 2,600 new jobs to the campus,” he said.

The VW Group North American Engineering and Planning Center is currently building a team of engineers in Chattanooga, with the goal of 200 new hires by the end of 2016. The Engineering and Planning Center is currently located in an interim facility less than two miles away from the Volkswagen Chattanooga plant. A new permanent facility is in the developmental stages. While significant, the majority of engineering work will remain in Germany.

Ken Zino is an auto industry veteran with global experience in print, broadcast and electronic media. He has auto testing, marketing, public relations and communications expertise garnered while working in Asia, Europe and the U.S.
View all posts by Ken Zino →
This entry was posted in engineering, news analysis and tagged auto tech centers, autoinformed.com, Chattanooga, tech center, Warren. Bookmark the permalink.