GM CEO Akerson to Auction His 1958 Corvette for Detroit Charity 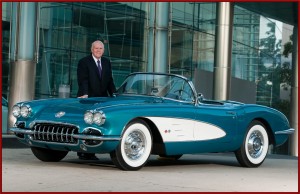 General Motors Chairman and CEO Dan Akerson plans to auction his 1958 Corvette with proceeds going to Habitat for Humanity Detroit and the rebuilding of the Morningside Commons neighborhood on the city’s lower east side.

Akerson and his wife Karin are active in Detroit donating their time, money and fundraising support to several charitable groups.

“A strong America is built on strong communities, and building those communities starts with one hammer, one nail and one person – and from there it’s contagious,” Akerson said. “My wife, Karin, and I want to see this effort to rebuild our headquarters city catch on, spread out and draw scores more volunteers and millions more in contributions.

Akerson’s 1958 Corvette will be on display during the Woodward Dream Cruise in the 60th Anniversary Corvette display at the Birmingham Triangle this weekend. Auction details will be announced by GM shortly. Interested parties can get more details at www.facebook.com/corvette.