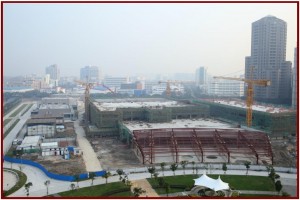 China – now in a growing trade war with the U.S. that will surely escalate next year as the U.S. presidential election gets underway – recently said that it does not and will not maintain measures that mandate the transfer of technology.

The second phase of GM’s China Advanced Technical Center in Shanghai China is well under way. What’s billed as the “most-comprehensive advanced automotive technology development” center in the communist nation will see work created directly for more than 300 employees who will eventually staff 62 test labs and nine research labs.

ATC2 follows a first phase of the ATC that saw the construction of an Advanced Materials Laboratory, which opened last September. ATC is now conducting research and development of battery cells and lightweight materials as a controversy about the safety of Chevrolet Volt battery fires is underway in the U.S. Next generation GM hybrids and electric vehicles will likely use a different design battery. (See GM Will Lend Cars to Concerned Chevrolet Volt Owners as NHTSA Volt Battery Fire Investigation Continues and Chevrolet Volt Earns 5 Stars in Euro NCAP with No Battery Fires. GM Announces Volt Export Plans to China Next Year)

GM intends to use Chinese battery suppliers in future electric vehicles – the latest setback for beleaguered U.S. workers who are facing grim employment prospects in the moribund U.S. economy. This is no longer a blue-collar or solely a UAW problem. College level white collar engineering jobs are at stake in advanced technologies touted by politicians as the key to returning the U.S. to global competitiveness.

General Motors also announced in October that it will develop an all-new global family of small-displacement “Ecotec” gasoline engines over the next several years in China in conjunction with the Shanghai Automotive Industry Corp. (SAIC), Shanghai General Motors (SGM) and the Pan Asia Technical Automotive Center (PATAC). Communist Chinese industrial policy requires local partners as a condition of access to the market.

General Motors in September said that it will develop with SAIC a new electric vehicle architecture in China. Further details of the vehicles to be designed, developed and sold in China under the Shanghai GM and SAIC brands were not disclosed. SAIC and GM will also use the new architecture to build electric vehicles around the globe for their own profits. (See GM and SAIC to Develop New Electric Vehicle in China with U.S. Taxpayer Supported GM’s EV Knowledge and Technology)

The GM SAIC deal at the time appeared to be an outgrowth of the latest Chinese industrial policy established roughly a year ago that required all western automakers to transfer the latest electric vehicle and other advanced technologies before the Communist party would approve further expansion of western companies in China.

However China – now in a growing trade war with the U.S. that will surely escalate next year as the U.S. presidential election gets underway – recently said that it does not and will not maintain measures that mandate the transfer of such technology. At the 22nd Joint Commission on Commerce and Trade (JCCT) in Chengdu last month, China claimed that “mastery of core technology” does not require technology transfer for electric vehicles – if you can believe anything a government says.

One thing you can believe is that the U.S. has a huge employment problem, and the auto industry – in the past the creator of the middle class – needs to be part of the solution to creating jobs, reducing deficits, funding medical care and supporting communities.