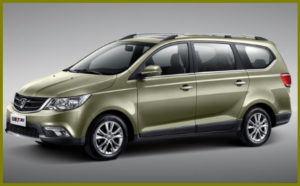 Year-to-date sales increased 9% on an annual basis to a record 2,718,315 units. During 2015, GM China with its 11 joint-ventures and two wholly-owned foreign enterprises with 58,000 employees sold more than 3.6 million vehicles in the world’s largest vehicle market.

For Cadillac it was the third consecutive month that growth topped 50%. Sales of the XT5 luxury crossover exceeded 4,000 units. Demand for the ATS-L and XTS sedans increased over 30% from the same month a year earlier. GM failed to break out the numbers, presumably because they are feeble when compared to the competition.

Buick deliveries in September were up 23% on an annual basis to 108,325 units, led by strong demand for the Excelle GT – which averaged monthly deliveries of nearly 30,000 units in the first nine months. The Envision SUV saw deliveries increase 70% to 18,518 units from the previous September. Deliveries of the Verano family surpassed 15,000 units.

Chevrolet deliveries grew 2.6% to 51,932 units from the previous September. It was the second consecutive month of sales growth. The brand was spearheaded by the Cruze family, whose demand was over 23,000 units. Chevrolet is expanding its portfolio in China. The brand introduced the sixth generation of its iconic Camaro muscle car in September and will debut the 2018 Equinox SUV next month in China.

Baojun deliveries in September totaled 62,719 units, a gain of 33% year over year. Demand for the Baojun 730 MPV was up 45% from the previous September. Baojun launched the 310 hatchback early last month, achieving deliveries of more than 5,000 units.

Wuling deliveries grew for the fourth straight month. Demand rose 6% year over year to 108,225 units, mainly driven by the strong performance of the Hong Guang family.