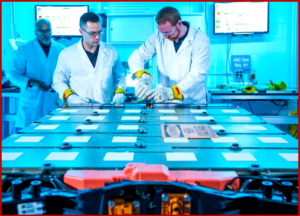 General Motors claims it will be the first automaker to use an almost completely wireless battery management system for production electric vehicles. This wireless system, or wBMS, developed with Analog Devices, Inc., will be a key to GM’s ability to ultimately power many different types of electric vehicles from a common set of battery components.

It is hoped that wBMS, will get GM’s Ultium-powered EVs to market faster because time won’t be needed to develop specific communications systems or redesign complex wiring designs for each new vehicle. It has already sped the creation of more automotive engineering/marketing jargon powered by acronyms. The wireless battery monitoring system will be standard on all planned GM vehicles powered by Ultium batteries.

“The wBMS helps to ensure the scalability of Ultium batteries across GM’s future lineup, covering different brands and vehicle segments, from heavy-duty trucks to performance vehicles,” GM said in a press release. There is still no word about a Corvette EV.

The wBMS will help GM’s electric vehicles balance chemistry within the individual battery cell groups for optimal performance. It can also conduct real-time battery pack health checks and refocus the network of modules and sensors as needed – this helps safeguard battery health over the vehicle’s lifespan.

By reducing wires within the batteries by up to 90%, the wireless system can help extend charging range by creating lighter vehicles overall and opening extra room for more batteries. The space and flexibility created by this reduction in wires aids a tidier design, and simpler and more streamlined battery restructuring as needed as well as manufacturing processes.

This wireless system in theory could also provide for battery reuse in secondary applications more easily than conventional wired monitoring systems. When the wireless packs are capacity-reduced to the point where they are no longer fit for optimum vehicle performance, but still functional as consistent power supplies, they can be combined with other wireless battery packs to form power generators. This can be done without a redesign or overhaul of the battery management system traditionally required in second-life usage.

GM’s claims its wireless battery management system is protected by cybersecurity measures that are in the company’s all-new electrical architecture or – another acronym warning – Vehicle Intelligence Platform. This includes protective features within the hardware and software layers, including protection of wireless communications.