GM Dumps Most Manufacturing in Russia for Imports Only 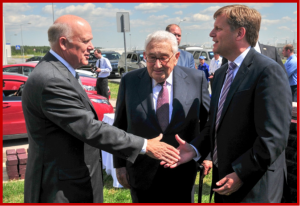 Then GM CEO Dan Akerson (l) with ex U.S. Secretary of State Henry Kissinger and U.S. Ambassador to Russia Michael McFaul (r) on Friday 22 June 2012 at the groundbreaking for the expansion of GM Auto, a wholly owned manufacturing plant in St. Petersburg.  The expansion then was to more than double GM Auto’s annual production capacity from the 98,000 vehicles to 230,000 vehicles by 2015.

Putin(g) it simply, General Motors today said the it will shutter the St. Petersburg plant in Russia with production ceasing by the middle of 2015. The contract assembly of Chevrolet vehicles at GAZ will be discontinued in 2015. The GM-AVTOVAZ joint venture will continue to build and market the current generation Chevrolet NIVA.

GM in Russia will now try to sell in the premium segment of  market with Cadillac – perhaps some built in China – and U.S.-built Chevrolet products such as the Corvette, Camaro and Tahoe.

Ford Motor, roughly in the same position in the Russian market that was once thought to be on track to be Europe’s largest has seen its European business plan aspirations for profitability this year shrink to negative numbers. However, Ford has made no such restructuring announcements for Russia that in the view of analysts are badly needed.

Because of the GM decision to change the business model in Russia, GM expects to record special charges of ~$600 million primarily in the first quarter of 2015. The special charges include sales incentives, dealer restructuring, contract cancellations and severance-related costs. Approximately $200 million of the net special charges will be non-cash expenses.

“This change in our business model in Russia is part of our global strategy to ensure long-term sustainability in markets where we operate,” said GM President Dan Ammann.

Ken Zino is an auto industry veteran with global experience in print, broadcast and electronic media. He has auto testing, marketing, public relations and communications expertise garnered while working in Asia, Europe and the U.S.
View all posts by Ken Zino →
This entry was posted in financial results, news analysis and tagged autoinformed, autoinformed.com, Ken Zino, putin, russia. Bookmark the permalink.