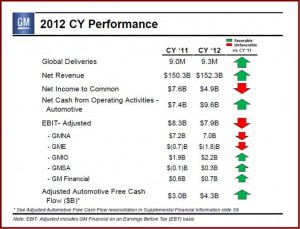 General Motors Co. (NYSE: GM) today announced 2012 calendar-year earnings of $4.9 billion, or $2.92 per fully diluted share, down from $7.6 billion, or $4.58 in 2011. The company sold 9.3 million vehicles during 2012; and the earnings, while positive for the third straight year, were hurt by deepening losses in Europe, which has cost GM -$18 billion since 1999. GM wrote down more than $5 billion in assets in the Eurozone, and it also wrote off more than half the value of  its PSA Citroen stock (-$220 million) acquired latest year in what GM said was a collaboration that would, eventually, save billions. North American costs also increased, resulting in flat earnings for GM’s most profitable market. GM did however pick up 4 points of market share in China, the world’s largest auto market.

The GM drop came on revenues that increased 1% to $152.3 billion, but special restructuring charges of -$500 million or $0.32 per share hurt especially when compared to 2011 when special items added $1.2 billion to earnings. Full-year earnings before interest and tax (EBIT) adjusted was $7.9 billion, compared with $8.3 billion in 2011. GM also made an accounting change in Q4 of 2012 that resulted in a $26 billion charge – actually a positive sign that it expects to be profitable again in 2013. However, no dividend is in sight for common shareholders.  (Read AutoInformed on GM Posts Record $9.1 Billion Profit in 2011 – $7.6B on Common and Toyota Ousts GM from Global Auto Sales Leadership. VW Third) 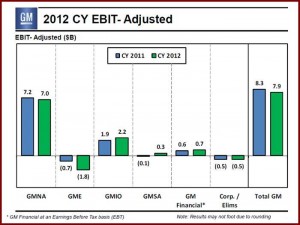 GM was passed by Toyota Motor in global sales during 2012 for the Number One spot; Volkswagen Group is a close third. 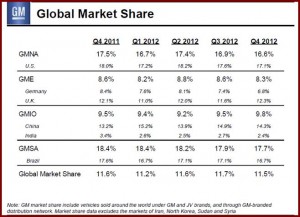 GM market share continues to erode, or is it seeking its natural level as incentives are trimmed?

GM’s U.S. defined benefit pension plans earned asset returns of 11.6% and ended the year 84% funded worth $13.1 billion, slightly improved from the prior year. As previously announced, during 2012 GM settled approximately $28 billion of its U.S. salaried pension liability through a combination of lump sum offers and annuity payments, which were transferred to Prudential insurance in November. GM said it expects no mandatory contributions to U.S. defined benefit pension plans for at least five years. (Read AutoInformed on GM Pension Buyout Financial Engineering or Coup?)