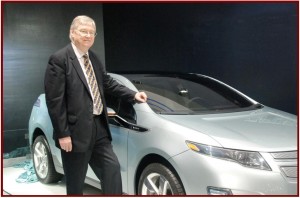 Reilly, 61, was the first president and chief executive officer of GM Daewoo Auto and Technology in Korea when it was founded in 2002.

The moves come as the economy of Europe remains battered, with auto sales on track to decline for the fourth straight year. During the first nine months of 2011, only 10,121,423 new cars were registered in the region, or 1.1% less than in the same period a year ago. Fiat, the owner of Chrysler, Ford and General Motors are all struggling to keep their European operations viable as all are losing market share. Results at Opel/Vauxhall and GM Europe are central to GM’s financial success, of course. (See EU Car Sales still Trending Down for Fourth Straight Year)

Reilly, 61, was the first president and chief executive officer of GM Daewoo Auto and Technology in Korea when it was founded in 2002.  He presided over GM’s growth in Asia Pacific and Latin America and has led GM Europe’s fragile restructuring since December 2009.

“Nick Reilly has answered the call for GM at every turn,” said GM Chairman and CEO Dan Akerson.  “He returned to Europe and successfully led the turnaround of our operations there during one of the most tumultuous times in our company’s history.”

Stracke, 55, returned to his native Germany in March 2011 to lead Opel/Vauxhall, helping it achieve a modest profit ahead of plan.  He was previously the vice president of GM Global Vehicle Engineering, based in Detroit.

Last year the German government – facing a taxpayer revolt and big deficits that foreshadowed the current budget turmoil in the United States – refused to provide €1.1 billion in subsidies that GM wanted for Opel, saying the company had enough cash to keep Opel running.

The cash, of course, came from U.S. taxpayers in 2009, who along with the United Auto Workers Union own the biggest stakes in GM, which now employs about 24,000 people in a reunited Germany – a Germany that refuses to support the U.S. in the ongoing Libyan war. The GM bankruptcy bailout by taxpayers remains politically unpopular in the U.S., and Opel continues to lose money in the depressed European market

A native of North Hesse in Germany, Karl-Friedrich Stracke joined Opel in 1979. Since 2009, he has been GM Vice President, Global Vehicle Engineering, responsible for product development and technology. During his tenure, engineers and technicians worldwide have developed what’s said by GM to be innovative vehicles and technologies, including the Opel Ampera hybrid vehicle, which is a clone of the Chevrolet Volt.

There is a large amount of friction between Opel and Chevrolet factions inside GM as both brands compete for the same customers. Chevrolet is increasingly turning to GM’s Korean subsidiary Daewoo as a source for small cars that Opel once designed exclusively. Opel’s future is clearly as a regional European brand in a market where it is struggling. (See also Karl-Friedrich Stracke Confirmed as Opel Vauxhall CEO)