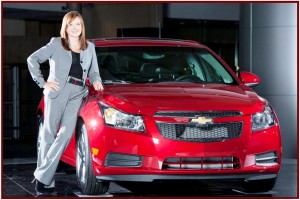 Mary Barra’s job as a senior GM executive during the ignition switch coverup means in our view that the ongoing internal investigation lacks credibility.

Ahead of show trial Congressional hearings next week, General Motors today said it would replace the ignition switch in all model years of its Chevrolet Cobalt, HHR, Pontiac G5, Solstice and Saturn Ion and Sky in the U.S.

This is GM’s third expansion of a safety recall where GM initially denied a problem existed, then recalled some cars, then recalled more cars, and now recalls even more. In baseball, three strikes means you’re out. Whether GM is out remains to be seen but it clearly has a credibility problem.

The faulty ignition switches, it is said, may have been used to repair the vehicles. Aside from an abundance of caution and, frankly, backside covering in this latest development, which mirrors Ford Motor’s replacement of millions of possibly defective Firestone Tires during its Explorer tread separation scandal, a beleaguered GM is struggling to regain consumer confidence as politicians and product liability lawyers with low – or lower – public approval ratings attempt to manipulate the crisis to their personal advantage.

The ignition switches in question are at the center of the company’s original February  recall, which  extended through the 2007 model year. About 95,000 faulty switches were sold to dealers and aftermarket wholesalers. Of those, about 90,000 were used to repair older vehicles before they were recalled in February. Because it is impossible to track down all the switches – since supplier Delphi modified the switch at some point – but kept the original part number, GM is now recalling 824,000 more vehicles in the U.S. to ensure that every car has a current ignition switch. GM claims it is unaware of any reports of fatalities with this new group of vehicles where a frontal crash occurred but the air bag failed to deploy.

GM records indicate the service parts may have been used for ignition repairs in:

Owners who may have had a suspect part installed will receive a letter the week of 21 April. GM dealers will replace their ignition switch free of charge as parts become available, as is required by U.S. safety regulations. Customers who paid to have their ignition switches replaced will be eligible for reimbursement.

Dealers, distributors and other parts customers will be told about the recall beginning 31 March.

Information on the ignition switch recall is available www.gmignitionupdate.com.

Ken Zino is an auto industry veteran with global experience in print, broadcast and electronic media. He has auto testing, marketing, public relations and communications expertise garnered while working in Asia, Europe and the U.S.
View all posts by Kenneth Zino →
This entry was posted in auto news and tagged autoinformed, autoinformed.com, Ken Zino, nhtsa. Bookmark the permalink.