Posted on 4 September 2012 by Kenneth Zino 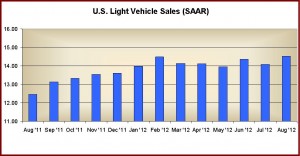 Some real gains were reaped by the Japanese Three, who are now fully recovered from last year’s natural disasters which cut production, and who are also benefiting from decades-long reputations for high quality, fuel-efficient cars as U.S. gasoline prices continue to average close to $4 a gallon.

The Detroit Three posted strong sales in August continuing a yearlong trend as the slowly recovering auto market continues to outpace the stalled U.S. Economy. Market leader General Motors Company sold 240,530 vehicles, a 10% increase in an industry that grew by a surprising  – at least to analysts – 20%. This was the strongest August since 2007. Number Two Ford Motor increased sales by 13% to 196,749. Chrysler Group managed a 14% increase at 148,472, its best performance since 2007.

Coming at the opening of the Democratic Presidential convention, the ongoing recovery of the job and wealth creating Detroit companies will be political fodder for the Administration in the face of Mitt Romney’s well established “let ‘em die stance” even though his firm Bain capital accepted a federal bailout as Rolling Stone magazine has just revealed.

Low interest loans helped sales as the Federal Reserve continues to print money, and there was a notable lack of market propping fleet sales among the Detroit nameplates. Based on preliminary estimates, it looks like the seasonally adjusted annual selling rate or SAAR is running at more than 14.5 million light trucks and cars with almost 12.5 million of those profitable retail sales. August was the retail sales month in more than four-and-a-half years.

The real gains, though, were reaped by the Japanese Three, who are now fully recovered from last year’s natural disasters which cut production, and who are benefiting from decades-long reputations for high quality, fuel-efficient cars as U.S. gasoline prices continue to average close to $4 a gallon. Small vehicle sales increased by almost 50% compared to last August.

Toyota posted sales of 188,520, led by the Camry (36,720), Corolla (24,311) and Prius (21,111), which continues to dominate the hybrid market. This performance was good enough to maintain Toyota in third place ahead of Chrysler on the sales charts, and within a chip shot of displacing Ford Motor from its second place position. To keep the pressure on Ford and it s momentum going, debt free Toyota announced 0% financing on Camry in September, which also continues on Corolla, Avalon, Tundra, Venza, RAV4, Highlander and Sienna.

Volkswagen also benefited from the resurgence of cars sales with its best August since 1973 at 41,011 units sold.