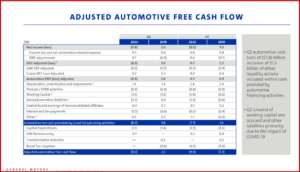 General Motors today reported a Q2 loss large enough – it rounds to One Billion Dollars –  to send it back toward bankruptcy if the Covid-19 plague continues unabated as it is predictably doing  under the current national mis-administration.

However, GM after its previous bankruptcy is in a stronger position  – financially, and with a wiser, faster acting management team – than it was when Wall Street speculation sent global markets plummeting in 2008-2009. The deep Great Recession that ensued was turned around by the Obama Administration, but the non-protected classes in lower income and racially harassed and immigrant populations never really recovered. Do we really want to watch that horror movie sequel?

At first glance the financials look grim, as Barra well knows. Noted here though is that GM has taken many actions over the past several years that positioned the company for a downturn. During GM’s Q2, it went to zero-based budgeting and reduced its ongoing costs through austerity measures, including reductions in advertising and other discretionary spending, compensation deferments and employee furloughs. These austerity measures are expected to “normalize if production and demand stabilize, with some of the austerity measures remaining permanent.”

Cost savings continued, with $3.8 billion trimmed since 2018. This buys GM a little over the year before things get grimmer under current economic conditions. If the leader of the Senate Mitch McConnell lets States go bankrupt – an elegant way to collapse the world economy, there is no way GM can live with its current cost slashing target of $4.0 to $4.5 billion, with another $0.2 billion in the second quarter. This will make Covid look like a day at the beach.

GM Q2 adjusted auto free cash flow was a breath taking -$9.0 billion, down -$11.6 billion year over year. The difference was largely due to the financial impact of the ongoing Covid pandemic and managed working capital unwind, partially offset by lower capital expenditures.

“GMNA results neared breakeven, demonstrating the effects of key actions taken the last several years. Performance in China improved on a sequential basis from the first quarter, with growing sales and equity income of $200 million in the second quarter,” said Barra.

GM also claimed it continued to invest in key product programs and launches, including GM’s EV programs and AV vehicle technology, full-size trucks and key crossover programs. However, GM continues to be a powerhouse when it comes to generating profits from ‘Mericans love of trucks ans SUVs. Time will tell if this is enough.

The aborted re-opening of Major League baseball – a wealthy and well-connected organization that can and did put in place strict protocols, including mask wearing and enormous amounts of testing with swift results and quarantining, is a warning for people who are trumpeting the reopening of the economy without any such measures – or even a plan to implement things equivalent to them for the general population – is a stark warning that Covid is throwing fast balls our leaders can’t even see, let alone hit. We are in the late innings of a shutout.