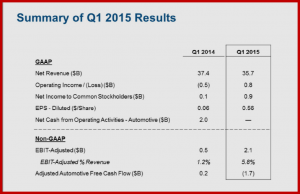 Worrisome declines in automotive operating and adjusted automotive cash flows were said to be due to one extra weekly payment cycle to suppliers.

General Motors Company (NYSE: GM) said Q1 income for common stockholders was $900 million, or $0.56 per diluted share on $35.7 billion net revenue, down from revenue of $37.4 million, but up from $0.06/share in the year earlier quarter. North America and GM Financial were the only divisions with solid operating results.

Once again, doubts were raised about GM’s ability anticipate and manage a global business. Q1 automotive cash flow from operating activities of $0.0 billion and adjusted automotive free cash flow of $(1.7) billion, were down from $2 billion and $200 million a year ago, respectively. These worrisome declines in automotive operating and adjusted automotive free cash flows were said to be due to one extra weekly payment cycle to suppliers during Q1 compared with the same quarter a year ago, and cash payments related to recalls and restructuring.

Special Q1 charges included $400 million in Russia, and $100 million for an “adjustment” – apparently ongoing – to the estimated costs of the defective ignition switch payoffs to victims of the safety defect. The Russian market exit costs include employee separation and severance; Dealer terminations and contract cancellations; Inventory & other asset write-downs.

Ken Zino is an auto industry veteran with global experience in print, broadcast and electronic media. He has auto testing, marketing, public relations and communications expertise garnered while working in Asia, Europe and the U.S.
View all posts by Kenneth Zino →
This entry was posted in financial results and tagged autoinformed.com, gm q1 2015. Bookmark the permalink.