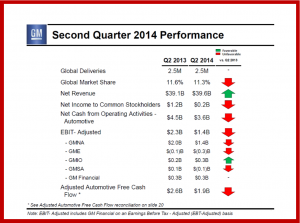 GM claims that its huge recall costs are largely behind it now. We will see.

General Motors Company (NYSE: GM) today announced Q2 net income for GM common stockholders of $200 million, or $0.11 per diluted share. One year earlier, GM earned $1.2 billion or $0.75 per diluted share. GM delivered 2.5 million vehicles during Q2, the same as one year ago in a recovering market. GM’s global market share was down -0.3% at 11.3%.

GM’s slowly improving operating performance – earnings before interest and tax adjusted (EBIT) were $1.4 billion and included the cost of -$1.2 billion in recall-related costs and -$0.2 billion in restructuring costs was whacked by charges. All told, there was a pre-tax net loss from special items of $1.3 billion, or $0.47 per diluted share, and costs of $1.2 billion pre-tax for recall-related repairs, or $0.44 per diluted share. All told a loss -$0.91 per share.

GM is taking a $900 million non-cash pre-tax special charge in Q2 for the estimated costs of future possible recalls for up to the next 10 years on 30 million GM vehicles on the road today. A special charge of $400 million was taken for the GM ignition switch compensation program. GM said this is the best estimate of the amounts that may be paid to claimants. It guess-timated the total cost could increase by approximately $200 million.

“Our underlying business performance in the first half of the year was strong as we grew our revenue on improved pricing and solid new vehicle launches,” said GM CEO Mary Barra. This statement is laughable if you look at the operating results in Q2. Only GMIO improved year-over-year. North America and China were bright spots. Europe and South America remain troublesome.

Ken Zino is an auto industry veteran with global experience in print, broadcast and electronic media. He has auto testing, marketing, public relations and communications expertise garnered while working in Asia, Europe and the U.S.
View all posts by Kenneth Zino →
This entry was posted in auto news, economy, financial results and tagged autoinformed, autoinformed.com, gm q2, Ken Zino. Bookmark the permalink.