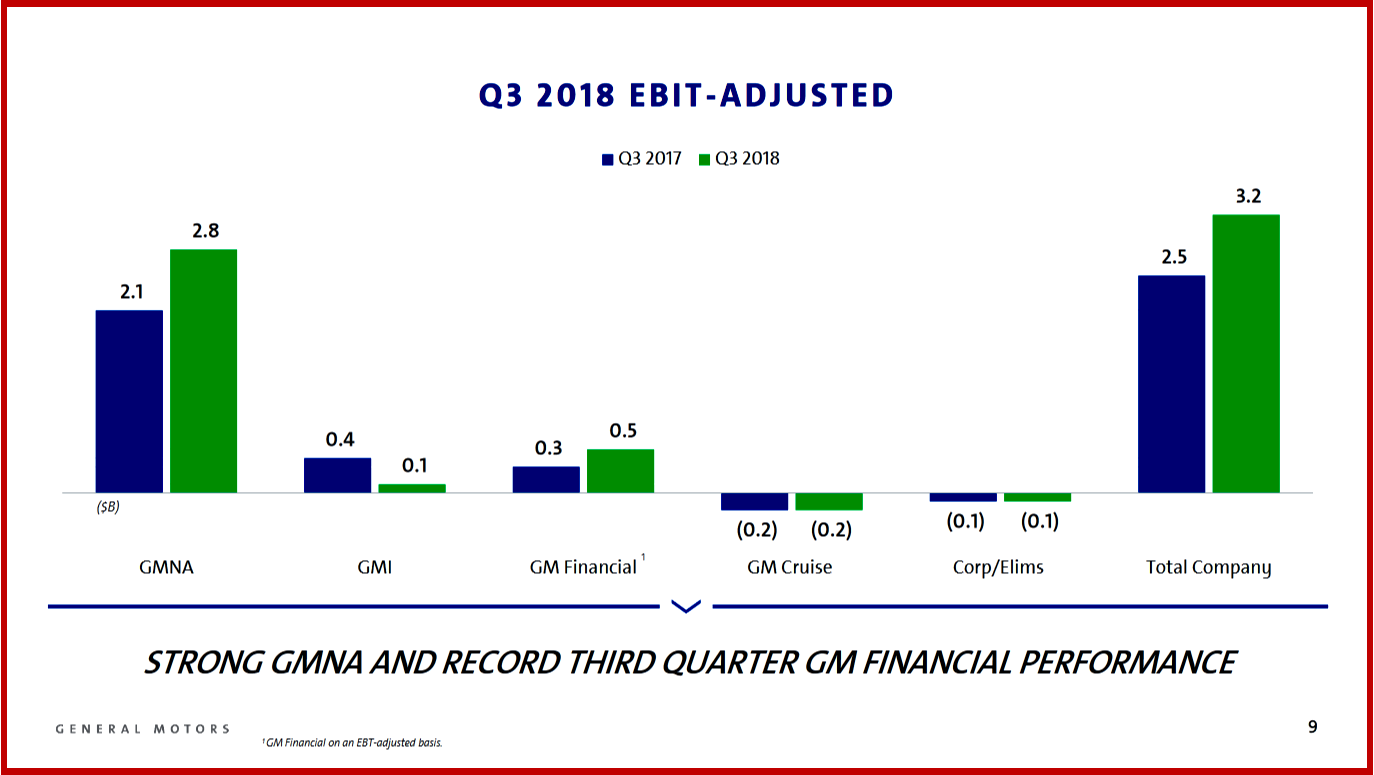 Sales of the Chevrolet Tahoe, Suburban and GMC Yukon full-size SUVs were up approximately 12% y-o-y. The Chevrolet Colorado and GMC Canyon posted the best Q3 midsize pickup sales since 2004.

The biggest of the Detroit 3 automakers is setting record equity income for Q3 in China, notwithstanding potentially declining conditions there and looming trade disputes. GM China delivered nearly 836,000 vehicles in the third quarter. Chevrolet gained momentum as year-to-date sales were up 10%, led by higher-content crossovers including the Equinox, which saw 29% growth compared to a year ago.

Cadillac sales in China set a third-quarter record, up 4% year over year and up 20% year to date. The brand is capitalizing on the country’s luxury trend, and sales are expected to grow for the full year.

“Our third-quarter performance demonstrates our determination to manage risks and deliver strong business results while continuing to advance the future of mobility,” said Mary Barra, Chairman and CEO.

GM North America posted margins of 10.2% in Q3, helped by an increase in average transaction prices that rose to record Q3 highs. The first light-duty 2019 Chevrolet Silverado and GMC Sierra pickups began arriving in dealerships in August. Customer deliveries of the Silverado LTZ and High Country and the GMC Sierra SLT, Denali and AT4 crew-cab models have exceeded expectations as production grows to meet expected demand.

GM expects to ship about 120,000 of the new trucks in the second half of 2018. Production of the all-new Chevrolet Blazer will begin late in the fourth quarter.

Cadillac’s first-ever XT4 compact luxury SUV began arriving in showrooms in the U.S., Canada and China in the third quarter. Cadillac will introduce a new model every six months through 2020, continuing next with the three-row XT6. Super Cruise received the top spot in Consumer Reports’ ranking of partially automated driving systems. Earlier this year, Cadillac announced Super Cruise technology will become available on every model starting in 2020.

As previously announced, GM is increasing production of the Bolt EV in the fourth quarter by 20% to meet growing demand. GM has partnered with Delta Electronics to develop faster EV charging technology. GM will deliver a prototype vehicle capable of a 180-mile range with less than 10 minutes of charging.

GM Financial delivered a record for revenue and third-quarter record EBT of $0.5 billion, resulting from portfolio growth and stable credit.

Despite challenging market conditions, GM China achieved record third-quarter equity income, driven by a strong mix of vehicles in popular segments, led by record Cadillac sales and strong Chevrolet deliveries. Cadillac sales in China set a third-quarter record, up 4% year over year and up 20% year to date. The brand is capitalizing on the country’s luxury trend, and sales are expected to grow for the full year.

GM China is introducing 10 new or refreshed models in the second half of 2018. The Baojun E200 launched in September. Along with the Buick Velite 6 unveiled earlier this year, these are the first in a wave of electric vehicles launching in China in the next several years.

In October, GM announced that Honda will join Cruise and GM to build a new autonomous vehicle. The purpose-built AV will serve a wide variety of use cases and be manufactured at high volume for global deployment. In addition to its $750 million equity investment in Cruise, Honda committed another $2 billion to Cruise, including development costs for the purpose-built AV. With this transaction, Cruise has now attracted $5 billion in external capital and is valued at $14.6 billion.