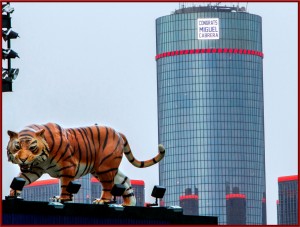 General Motors is adding three panels to its changing LED sign atop its Renaissance Center headquarters this weekend to celebrate Detroit Tigers third baseman Miguel Cabrera’s winning the American League Triple Crown. Cabrera led the league during the 2012 regular season in the batting average (.330), runs batted in (139) and home runs (44). If there’s any justice in the baseball world Cabrera should be the most valuable player when the votes are tallied, unless something fishy occurs.

José Miguel Cabrera Torres or “Miggy” was the first player from either league to do so in 45 years since 1967 by Hall of Famer Carl Yazstremski, who was slugging in the AL for the then still Babe Ruth cursed Red Sox. The Triple Crown is rare, having been won only 17 times since 1878. The Venezuelan Cabrera – a seven-time MLB all-star player – was born in 1983, the year Yazstremski retired after 23 years with Boston.