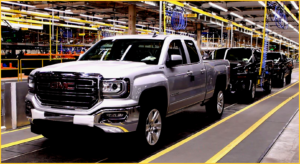 Trucks are leading the recovery.

General Motors (NYSE: GM) announced today that it delivered 492,489 vehicles in the second quarter of 2020, a decrease in total vehicle sales of about -34% compared to a year ago. However, GM said demand outpaced supply in the latter half of the quarter.

Availability of models on dealer lots is expected to start growing now that most manufacturing assembly plants have returned to normal operating levels. U.S. pickup truck and full-size SUV plants returned to three shifts and nearly all car and crossover plants returned to the same number of shifts as pre-pandemic levels.

Most GM U.S. plants, including all truck and SUV plants, will continue to operate during the traditional two-week summer shutdown. GM’s increasing output will be devoted to restocking retail channels with capacity made available by lower rental volumes.

GM said it is collaborating with logistics and trucking companies to ensure vehicles are shipping as soon as they are produced. The company is well positioned with both strong empty railcar supply and haul-away capacity to respond quickly and enable the flow of new vehicles to dealers.

“Although the economy has a long way to go from a very low base, vehicle sales responded strongly in May to the expiration of many stay-at-home orders,” noted GM Chief Economist, Elaine Buckberg.

“After falling into a deep recession in March, the U.S. economy has begun to recover as it reopens. Auto sales are benefiting from historically low interest rates that make now an attractive time to buy a vehicle for many customers. We expect continued sales recovery as businesses ramp back up but recognize that the path forward may not be linear, as rising infections in many states may lead to steps backward in the reopening process,” said Buckberg.

The company’s most recent crossover launches continued their momentum in the quarter. Since the Chevrolet Blazer launched in January 2019, sales have been steadily increasing, and are up 68% year over year in the second quarter. The all-new Chevrolet Trailblazer and Buick Encore GX have been performing well in a highly competitive segment. They’ve been gaining retail market share every month since launch and combined, have captured more than 10% of the small SUV segment according to the latest J.D. Power PIN data. Next to launch is GM’s portfolio of full-size SUVs, including the redesigned Chevrolet Tahoe and Suburban, GMC Yukon and Yukon XL, and Cadillac Escalade, now available with enhanced Super Cruise.

Ken Zino is an auto industry veteran with global experience in print, broadcast and electronic media. He has auto testing, marketing, public relations and communications expertise garnered while working in Asia, Europe and the U.S.
View all posts by Ken Zino →
This entry was posted in economy, sales and tagged auto industry commentary, autoinformed.com, GM sales Q2, Ken Zino. Bookmark the permalink.