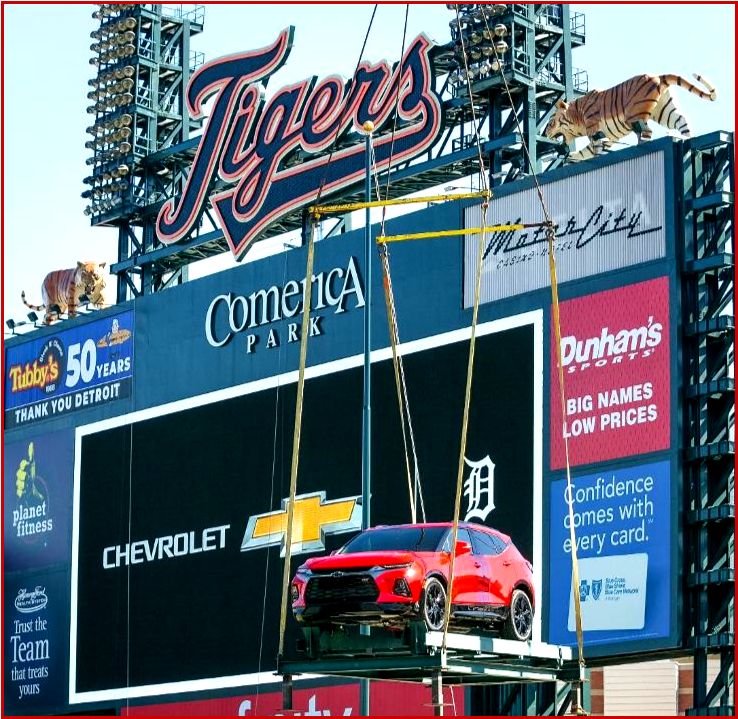 GM Puts ‘Mexican Made Blazer on Display for Opening Day at Comerica Park. UAW members were outraged and quickly a Traverse served as a pinch hitter.

In the latest example of idiocy from the tone-deaf management of General Motors, the opening day lineup was changed as UAW members arose in anger and successfully got a Mexican-Made Chevrolet Blazer removed from the Chevrolet Fountain at its hometown Major League stadium. Both the Union and GM leadership just watched the Mexican stolen base with defensive indifference. In the Blazer’s place now will be a U.S.-made Traverse.

I guess GM management missed the rewrite of the song that is now Baseball, Tacos, No-Jobs de Leche Pie and Chevrolet. And maybe also forgot that this is a contract year for its Canadian and U.S. unions. Could it be that the new GM is that desperate to cut costs, just like the old GM? (General Motors Revises 2015 Strategy to Slash Costs and Streamline Engineering as Market and Competition Toughen)

Ironically, the fiasco came as the Detroit Tigers were mostly unable to hit the ball after Jordan Zimmerman’s crafty seven innings of no-hit ball against the Blue Jays in Toronto’s home opener. Detroit ultimately squeaked by with a split in the four games in Canada, then got worked over by the New Yawk Yankees.  Anyway that you throw it – even with spin -.500 ball won’t get you to the playoffs next September of 2020  when the contracts with Unifor and the UAW expire.

GM, readers may recall, is currently-getting its butt kicked in Canada after a job-killing re-org announcement that is closing one of its most productive, high quality and flexible plants – Oshawa. This has resulted in a Canadian boycott with a resulting sales dive for all GM vehicles across Canada (-12% through February in a healthy market for other automakers. and at retail -21% in March). GM U.S. sales in the Q1 of 2019 were down 7% year-over-year.

GM is also getting its butt kicked in the stock market as share prices languish at ~$38, near its ‘IPO return to market’ after what was now clearly a less than cleansing bankruptcy. (The GM Grinch that Stole Christmas, or Did It?,  Taxpayers to Recoup $1.3 Billion on Latest GM Stock Sale, GM Stock Below $25 down from $39 High as Conference Opens, U.S. Taxpayers Get $13.5 Billion from GM IPO. Still Own 33%)

As AutoInformed has covered extensively since November 2018 when GM said it will idle five plants in North America this year and early next year – affecting more than 6000 jobs – the Oshawa shut-out was minor league with major consequences.

GM said the cuts are part of its restructuring — which also included cutting 8,000 white-collar jobs — and will save it $2.5 billion this year. The plants that were idled mostly build sedans, which have seen sales decline as consumers shift to buying SUVs and pickups for the moment. What’s left of the car market now firmly belongs to Toyota, Honda and Nissan, as well as Lexus, BMW and Mercedes-Benz in luxury segments.

Two of those doomed UAW GM plants are in Michigan: Detroit-Hamtramck, set to stop production in January 2020, and Warren Transmission going down this year. Another, of course, is Unifor-represented Oshawa in Ontario, which built the outgoing model of the Chevrolet Silverado and GMC Sierra pickups, Chevrolet Impala and Cadillac XTS.

The GM solution for both self-created losing strategies is a hidden ball trick and a change-up with spin: Switch out the Blazer with an American-made Traverse at the Chevrolet display in Detroit while pulling down all 2019 Comerica photos from the media site and stop reporting monthly sales in Canada.

Like the elite policy makers in Washington from both highly-paid establishment parties who think fans can’t see what’s going on  – a lot of working people know how to keep score at the ballpark and in life. That’s the wild card team in the upcoming election, with players to be named later. And thank you Bill Clinton for NAFTA’s migration of jobs to Mexico.

“General Motors did just announce a $300 million dollar investment at its Orion assembly plant here in Michigan,” President Trump said in Michigan on Saturday. “But I’m also fighting with General Motors and the UAW to take swift action on the GM plants at Hamtramck and Warren, Michigan, and Lordstown, Ohio. Get the damn plants open.” Sounds like an extra base hit to voters? However, no General Motors Kisses Trump’s Butt so far.

Ken Zino is an auto industry veteran with global experience in print, broadcast and electronic media. He has auto testing, marketing, public relations and communications expertise garnered while working in Asia, Europe and the U.S.
View all posts by Ken Zino →
This entry was posted in AutoInformed Editorial, customer satisfaction, fools 'n frauds, labor issues, recalls. Bookmark the permalink.